Fred Pearce - The Landgrabbers: The New Fight Over Who Owns The Earth 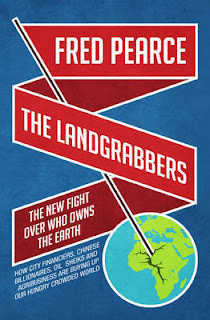 Unnoticed to the vast majority of people in the world, there is an enormous "grab" of land taking place. Much of the reason for this land grab comes down to one word - profit. There are other reasons; fear of food insecurity or concerns for other natural resources. But by and large the individuals and the organisations that are grabbing land around the world, kicking off the current inhabitants and often dramatically alternating the ecology of the place, are doing so because they hope to make money from bio-fuels, food price rises or access to other resources.

Estimates of how much land is being grabbed vary dramatically, the World Bank has estimated that 47 million hectares have been bought up, stolen or taken through deals of varying legality. Oxfam though came up with an estimate of 227 million hectares a year or so after the World Bank. Whichever extreme is right, this is an enormous quantity of space that has affected millions of people.

Fred Pearce argues that most land grabbing is taking place to impose industrial scale farming on a region. Farming that can produce the sort of mono-crops that will make large amounts of money on the market when sold for food, or biofuel. Often this land is sold because it is described as being empty or under-used. But as Pearce points out, "in reality very little land in the world today is unclaimed or unused."

He points out, for instance, that one of the largest "prizes" for the landgrabbers, is an area of grasslands known as the Guinea Savannah Zone, half the size of the US. Pearce writes that "The World Bank calls these four million square kilometres 'the world's last large reserves of underused land'." But "underused" in this context is from the point of view of western, industralised farming. For the 600 million African peasants, farmers and herders (a tenth of the world's population) who live in this area, they certainly don't see the land as underused. In fact it provides their livelihoods and their food. They may well need development, but not development that will push them off their land to live on the margins of enormous cities, in poverty stricken slums and shanty towns.

Some of Pearce's book is an excellent critique of modern farming methods, that are geared towards profit not feeding people. He points out that the landgrabbing that is taken place does so based on a vision of economics that is tremendously destructive to the natural world and is enormously bad at feeding people, particularly the poorest. This vision of farming is dangerous however, because it assumes that the best way to produce crops is through coping the energy intensive, pesticide dependent methods used in North America, Europe and other parts of the developed world. Pearce points out that this often doesn't work. Sometimes because crops are inappropriate, sometimes because it doesn't fit with local communities and their ways of organising, but also because it makes enormous assumptions about local ecology.

Those who have studied historical colonialism will see many parallels of past practice by imperial powers and landgrabs today. Indeed Pearce uses a number of historical examples to demonstrate how attempts to impose western crops and methods on parts of Africa or Southern America rapidly failed. However the similarities are not simply todo with failures like this, or even the ruthless treatment of local indigenous peoples. There are often racist assumptions about local people and practises that justify to the landgrabber their behaviour. The vision of land as "under utilised" is one aspect of this.

In his marvellous book Changes in the Land William Cronon makes the point that English colonialists in New England considered Native Americans "lazy" because they under-utilised their own land. Compare this with this quote that Fred Pearce uses from a Chinese manager who runs farmland in Africa:

"The biggest problem with agriculture in Senegal is people's mentality. They are very easily satisfied. If they have enough to eat, they won't work any more. There is a lot of arable land that they don't use."

Some of these landgrabs are enormous. They become self-sufficient areas, outside of normal law and order. Pearce documents the dubious and violent methods that land is taken away from people who have farmed or herded on it for decades. Broken promises, attacks, violence or threats are often part of the process.

Pearce quotes a woman in Cambodia, expelled so a company can grow sugar for export to England:

"Some soldiers came and told me to remove my house, because it was not my land. I said no. I said I would report them to the commune officer. But they just smashed the house down. I built another one, but they burnt that. Then they burned our rice and all our belongings. They offered just a hectare in compensation. But it was sacred forest land, which isn't theirs to give. I can't use that land. I'd be scared to."

Later a man from the same village urges Pearce to not buy sugar, "it's corrupt; it's not clean. People are crying here because they have lost their land."

Land is often given to outside companies and individuals for almost nothing by governments of developing nations desperately hoping that outside capital might trickle down and improve their economies. It rarely does. Sometimes the areas become mere extensions of another country, much like US military bases in the Middle East with their own McDonald's and Starbucks. The Loliondo game reserve in the Serengeti has brought up to offer holidays to rich tourists. Mobile phone signals there welcome you to the United Arab Emirates. A part of Africa has become part of one of the richest nations in the world, a playground for the rich. It should be noted that purchases aren't always multinationals (nor foreign countries) large parts of South America are owned by rich individuals, and the Moonies for instance, own 800,000 hectares of land in Brazil and Paraguay.

The news isn't always bad. Pearce documents the resistance, the protests and the demonstrations that often end in repression, but occasionally do win compensation or force the retreat of a foreign multinational. Often the role of the local state here is to protect the investment of the outsider, brutally attacking its own population.

At the heart of Pearce's critique is an understanding of the way that the profits obtained from multinationals who can grow crops on enormous areas of land grabbed in the developing world, over-ride all other interests. States, locally and far away from the land-grab, facilitate this process as they organise in the interest of the ruling classes and the rich. The weakness of Pearce's book is perhaps the lack of alternative. He does describe how alternate agriculture could easily feed the world, and how industrial farming is the worst possible solution. He also shows how such small scale farming is far better for the environment and significantly better in terms of carbon emissions. But Pearce's doesn't really show how we can stop the capitalist landgrab and return power to local indigenous people. In fact Pearce ends up looking towards enlightened farming (and praises a few examples of positive investment in the developing world) rather than mass movements that could fundamentally challenge the priorities of the system.

Nonetheless, Fred Pearce has provided a very useful book for those trying to understand the modern agricultural world and its interaction with the wider global economy. It is a tragic and sad book, filled with the horrors of displaced people and lost lands. It is a damning indictment of a system organised in the interests of the few rather than the majority. It is a system that Pearce concludes is unable to provide for people today or in the future.

Suzanne Jeffrey speaking on Food, Climate & the New Scramble for Africa at Marxism 2012 in London
Posted by Resolute Reader at 7:16 pm

Farming with the facilities of modern science and technology increases the production. So, modern farming methods are must to get better farming production. To learn more about modern agriculture and farming please visit the site linked bellow.

Thanks for your comment. I'm afraid though, that I don't agree. What "modern farming", by which you mean highly technological, intensive mono-cropping fueled by chemical fertilisers and pesticides does is to provide enormous profits for multinationals.

There is also ample evidence, that mixed cropping and small scale farming has higher yields of total crops from specific areas.

The problem is not technology or science. It is a case of a political and economic system that undermines small scale farmers in the interest of high profit farming. That is precisely what Fred Pearce argues against in this book, as do several others in the links I've provided to reviews on this site.