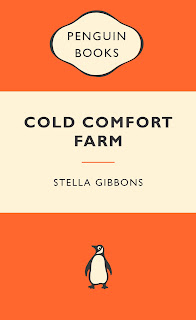 Stella Gibbon's Cold Comfort Farm is one of those novels that has outgrown the object of its lampoon. Who today reads Mary Webb? Her purple prose is, I suspect, mostly known through the passages that Stella Gibbons highlights with a couple of asterisks to let the reader know that a moment of pure piss taking. Stella Gibbons is a wonderful writer, at her best when destroying another authors style:

"***The country for miles, under the blanket of the dark which brought no peace was in its annual tortured ferment of spring growth; worm jarred with worm and seed with seed... The trout-sperm in the muddle hollow under Nettle-Finch Weir were agitated..."

The novel centres on the visit of Flora Poste to Cold Comfort Farm. The Farm is an island of insanity in the wider countryside. It's inhabitants are all ill-adjusted individuals, whose lives are twisted and distorted by the bizarre matriarch Aunt Ada, who confines herself to her room except for an annual counting.

Flora rapidlly breaks down these individuals, finding each of them what they really want and undermining the Aunt Ada's power until Ada herself is sent to Paris on an aeroplane transformed by the hidden potential found in an old edition of Vogue.

Stella Gibbons has a unique comic style. In parts the humour is near slapstick (people fall down the well regularly, or enjoy talking to water-voles). Elsewhere the amusement is in the prose.

"The farmhouse was a long, low building, two-storied in parts. Other parts of it were three-storied. Edward the Sixth had originally owned it in the form of a shed in which he housed his swineherd, but he had gown tired of it and had it rebuilt in Sussex clay. Then he pulled it down. Elizabeth had rebuilt it, with a good many chimneys in one way and another. The Charleses had let it alone.; but William and Mary had pulled it down again, and George the First had rebuilt it. George the Second however burned it down. George the Third added another wing. George the Fourth pulled it down again.... it was known locally as 'The Kings Whim'."

At times this is a very dark novel. Tell anyone that you're reading it, and if they know the book, they quote "something wicked in the woodshed". Yet there is a deeper darkness that lies in the unknown. Flora visits Cold Comfort from the bright lights of London. Rural England is full of strange practices and behaviour. Incest is hinted at, and Gibbon's use of strange languages and invented practises only adds to this strangeness, clettering and mollocking are never really explained, but certainly sound wrong, even if the former is just a way of cleaning dishes. Stella Gibbons' wonderful writing, her humour and her brilliant spoof of a particular type of novel, makes this a literary classic.
Posted by Resolute Reader at 7:27 pm