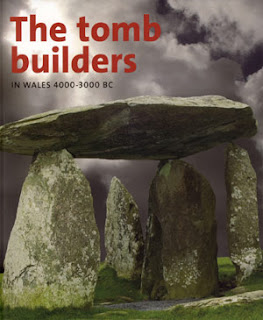 The Tomb Builders is a companion book to Shadowland. Both deal with very distinct, but linked periods of ancient history. They concentrate on the region we now know as Wales, though as I remarked when reviewing Shadowland it is a problem of modern nationalism that we are trying to understand an areas region through a nation unknown during the period covered.

In fact, Burrows makes it clear that any delineation between those living and tomb building in what is now known as Wales and elsewhere in what is now known as Europe is impossible. Influences on tomb styles in Wales come from Ireland, Scotland, Cornwall (and wider England) and northern France. Burrows looks at these different styles and traces the links they represent with a much wider human landscape. He examines for instance, the way that these ancient people must have traded or exchanged tools from hundreds or thousands of miles away.

Given that some of these tombs date from five or six millennia ago we know very little about their use. Excavation has taught us much. So we can speculate with reasonable accuracy on how the dead were interred (usually after the bodies had lost most, or all of their flesh) and how some tombs were repeatedly reused. We also know that some tombs were not re-opened, and others were revisited hundreds of years after they had been sealed, for further burials, or internment of ashes.

As with the stone circles discussed in Shadowland, Burrow shows that often the wider landscape had a important role in the choice of position for tombs. The burrows and cairns surrounding them were positioned often so that they commanded a prominent position along mountain routes and valleys.

The era of the tomb builders ended fairly abruptly as communities grew in size and larger scale monuments became more common. Burrows also links this with a rise in the use of single-occupancy burials, perhaps reflecting a change in culture. The tombs as we see them today are often very different from the covered mounds that were originally built and their antiquity often belays the fact that they may well have only been in use as tombs for a few centuries, as radiocarbon evidence from the bones found inside shows.

Nonetheless, the tombs themselves had an important role in the longer term culture of those who lived in the region. This was true of ancient times, but also true of much more recent communities. Burrows finishes this short book with a quick look at some of the more recent myths and legends associated with the burial places.

This is an excellent introduction to the ancient history of Wales, beautifully illustrated and the author is not afraid to argue his own point of view, even if it is not universally accepted (he argues for instance, that a passage tomb at Bryn Celli Ddu in Anglesey was deliberately lined up with the midsummer solstice. This is a view first put forward in the early 20th century and has been much debated since.) For anyone interested in the period, or visiting sites like Tinkinswood I'd recommend this read.

Burrow - Shadowland
Pryor - Britain BC
Posted by Resolute Reader at 8:37 am