Robert Gildea - Marianne in Chains: Daily Life in the Heart of France During the German Occupation 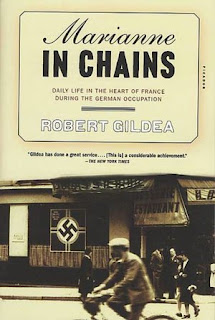 Having read Angus Calder's wonderful book on the experience of ordinary people in Britain during World War II, I began to wonder if there was a similar work that examined the lives of people elsewhere during that conflict. Marianne in Chains was suggested to me as a book that might help bring to life the experience of the German Occupation of France.

Robert Gildea argues that the French experience of the Occupation is far from the simplified one that is usually portrayed. Far from the population being divided into those who resisted, and did so united together, and those who collaborated, he believes that reality was much more complex. In particular he argues that those who resisted were very much in a minority and that most people acted under a more complex code. For instance he considers the case of employers who committed their factories to producing materials, such as weapons, for the German war effort. Here he argues that the consensual view at the time was that "employers had no choice about working for the Germans and that jobs had to be preserved [or the factory might be relocated to Germany]. What was not acceptable was doing the German's bidding with too much enthusiasm and putting pressure on workers to go to Germany."

Later he continues "[a]s a rule of thumb, actions that undermined the family, community, or nation were illegitimate... To rip off the Germans by small-scale black marketing was just Gallic cunning, but large-scale dealing that deprived the community of scarce resources was not considered right. Socially, it was acceptable to drink with a German in a bar but not to invite him home" and so on.

Where resistance did occur, Gildea implies it was rarely the action of a whole town or community. He examines one important case, the assassination of a leading German soldier Colonel Hotz by a Communist, Gilbert Brustlein. After the war, the PCF argued that this action had helped trigger mass resistance in the west of France. For the people of Nantes however, the event was remembered as ushering in repression and the murder of dozens of people in revenge.

For Gildea any resistance that took place was likely to be much more muted. A defiant piece of graffiti or displaying the French flag, singing the Marseille or engaging in illegal dances. Here though the breaking of German rules is considered rarely an act of conscious resistance as opposed to an act of rebellion against rules.

However while Gildea is clearly right to argue that any resistance to the German Occupation rarely involved thousands of people taking up guns, in his enthusiasm to pursue this theme I think he misses far more fundamental questions. This becomes clearer when he examines the events that took place as the German's ordered Jews to be identified, then deprived of their social positions and eventually deported.

Gildea argues that when it came to the "Aryanization" of the French economy - depriving Jewish business owners and workers of their positions, the removal of Jewish company directors and so on, the "French public could be a good deal more anti-Semitic and mercenary than the French administration." He lists a number of heart-breaking examples of how business owners, like the owner of the Cafe de la Ville in Saumur, "saw the opportunity to deal with a rival by complaining to the sub prefect that 'the Jew Lazare Schnerb' had not yet put up a yellow sign on his Hotel-Bar."

"The details of the process of Aryanization provide hard evidence of the anti-Semitism of at least a portion of French people, including the wealthy and privileged, a conclusion that goes against the grain of some recent writing that tends to blame the Vichy regime while exculpating the people."

While this is undoubtedly true, Gildea concentrates on business examples. His only counter examples however are from a different section of the French population - the working class:

"The labor inspector of Maine-et-Loire, Lehlmann, refused to organise a census of Jewish employees in private firms, with a view to dismissing them, saying that his job was to protect workers."

While Gildea frequently discusses strikes and actions of working class organisations, particularly the Communist Party, he lacks any class framework. This leads I think, to a lack of clarity when he's trying to explain the dynamics of the occupation. The working class prior to the war had seen enormous rebellions, particularly during the Popular Front government. The lack of any major French fascist forces was in no small part due to the activities of the working class movement in the early 1930s. The demoralisation that followed, in part because of the limits of Third Period Stalinism, had led the PCF into a dead end. The fact that significant numbers of workers did strike, even if it was mostly over bread and butter issues, during the war, shows the reality of what resistance meant.

This is not to say that Gildea is wrong to argue that the reality of France during the occupation was not one of mass resistance. As he points out, many places never saw a German soldier and the occupying forces took a conscious decision that they were not doing to France what was being done in Poland and Eastern Europe. "The Germans are not the enemies of France, but their friends" stated one German military administrator to his French colleague as he prepared to leave following the Allied invasion.

Perhaps the strongest part of the book is Gildea's examination of the transition from occupation to the post-war world. He makes the point that most of those mayors and town bureaucrats who had continued in place during the years of Vichy and Occupation remained in their seats and were re-elected. Those who joined the resistance (or claimed membership) often did so late in the day or to avoid, what they saw as the potential for Communist rebellion in the wake of the war. Gildea looks at the way that the myth of the resistance was being created even as the German vehicles pulled out of the town squares, but that often this covered up the fact that for much of the war, many bureaucrats had collaborated with the fascists believing that they had no other choice.

Robert Gildea's book has provided much food for thought. I do not think it should be the last word on this subject though as it certainly left me feeling unsatisfied. I felt that there were insights but that Gildea hadn't quite got to grips with what was really happening. The book probably suffers because it concentrates on a particular region of mid-France rather than Paris or other larger cities. Nonetheless this is an interesting read, though I am told that Robert Paxton's book on Vichy France covers the subject far better.
Posted by Resolute Reader at 12:01 am