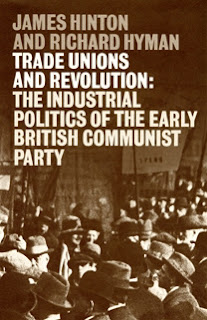 How should revolutionary socialists best relate to situations that are not revolutionary? How should those socialists organise, particularly in periods when the working class is not yet confident to fight against the system, when their rights, pay and conditions are under attack by the capitalists?

These questions are not easy ones to answer, but for socialists in Britain and indeed in large parts of the world, they are crucial ones. In Britain, with its history of Labour politics and Trade Union bureaucracy, it has been common to look back to the early years of the Communist Party and attempt to learn lessons from their activity.

The British CP was founded in the early 1920s. It brought together a number of varied factions of the Marxist left, encouraged by the success and the prestige of the Russian Revolution. Early in its history, as a party of a few thousands, though with many key industrial militants and in places, significant influence in the working class movement, the CP faced one of its greatest tests - the General Strike of 1926. This strike was a bureaucratic one. It stemmed not from the anger and militancy of ordinary workers, but from the leadership of the Trade Unions. Millions of workers took part, bravely and committed yet during the strike it was rare for their own creative organisation to break through the barriers of the trade union bureaucrats. After the defeat of the strike, the CP which had used its influence to encourage workers to look towards the General Council of the TUC, rather than their own self organisation, suffered major setbacks. Along with victimisation of many committed activists, the party lost many members and much influence. Rather than learn from its mistakes, the CP continued down a mistaken path which, it could be argued, left its union militants confused about the role of the union bureaucracy for decades.

This short book, published in 1975 is an explicitly socialist attempt to understand what the CP did wrong and draw some conclusions. Hinton and Hyman make no bones about it. They believe that the CP strategy was based on an incorrect understanding of the role of the union leaderships and an incorrect vision of how to move forward. In particular, they argue that any attempt to build a mass communist organisation in the 1920s was not just doomed to failure, but a mistake that could only further damage the prospects for building the revolutionary socialist movement.

This can be summed up in their conclusion, emphasised by being provocatively re-printed on the back cover. "By attempting to build a mass revolutionary party in Britain in the 1920s, where the labour movement was in retreat, the Communist Party committed a tragic blunder. It sacrificed clarity in its propaganda and its theory, and lost the opportunity to form a revolutionary cadre."

This cadre, they argue, could have formed the basis of a much stronger party in the future, for coming struggles. There is some truth to this. The ongoing existence of many tiny socialist sects throughout the world, demonstrates that theoretical clarity can create resilience. Yet the ongoing existence of a theoretically pure, stable, yet tiny socialist organisation that merely replicates itself over the years is hardly what the founders of revolutionary Marxism had in mind. The CP were, under the influence of the Russian Revolution and the Communist International attempting to build political organisation that could lead to a successful socialist revolution in the UK.

The CP's own analysis of the union leaders was frequently excellent, and their strategies for strengthening the working class movement and building their own influence were based on some excellent initiatives. The National Minority Movement was a CP initiative aimed at "making the trade unions real militant organizations for the class struggle". This attempted to bring together the best rank and file workers with the best of the union leaderships to encourage more militant action. Yet the CP underestimated the degree to which union bureaucrats are pulled by their social position, desiring less social confrontation and more negotiation.

The betrayal of these leaders, including many lefts whom the CP had courted and worked with over the years left the organisation confused. As the authors point out, "many party leaders found the betrayal of the General Strike incomprehensible."

So why did the CP have such a confused understanding of the situation. In one sense, Hinton and Hyman are right. Lack of theoretical clarity stemmed from the confused and ofter sectarian politics that marked out the socialist organisations that had developed in Britain in the late nineteenth and early twentieth centuries. Yet there was also the dominating influence of the Communist International and, in particular the Bolsheviks. The Russian Revolution had be lead by individuals and organisations that had little practical experience of trade unions and reformist organisations. Their understanding of the role of the trade union bureaucrat was limited and, in the aftermath of the Revolution, the isolation of Russia had led the Soviet government to court those organisations in the capitalist nations that could help undermine that isolation. The Anglo-Russian Trade Unity Committee was one example that helped to encourage the British CP to support leaders of British unions.

Hinton and Hyman play down the importance of this, as an excellent critique of this book by Duncan Hallas points out;

"the CPGB was not and could not be left to itself. It was part of a centralised world movement. It owed its very existence to the Russian revolution. Its leaders and members were profoundly influenced by advice and guidance (leave aside the question of “orders”) from the Moscow centre."

Hinton and Hyman also, repeatedly play down the opportunity for building "mass" socialist organisation, it is "only in the most abstract sense that 1926 can be described as a moment of revolutionary opportunity", they continue;

"The Party was operating in a profoundly unfavourable situation... Politically, the established institutions of the labour movement exerted a profound influence over the working class..."

The problem with this analysis, is that it is a recipe for sitting back and concentrating on discussing abstract ideas until the moments of revolutionary crisis appear. Yet, by then the moment will be lost as Rosa Luxemburg found to her dismay. You cannot build a mass revolutionary socialist group during the throws of a revolution. 1926 was not a revolutionary moment, yet it was a year when millions of workers took extended action as part of a General Strike, albeit one with many weaknesses. The organisation may have been small, but it had prestige and influence - the Russian Revolution was still a living reality, even with its distortions and the rise of Stalin.

Had the CP operated better during 1926 they may not have become a mass organisation. Certainly they were unlikely to prevent the sell-out of the bureaucrats. Yet they could have won significant numbers of militants to a stronger understanding of their role and the role of the union leaderships. The CP could have ended the General Strike with a growing membership, rather than a shrinking and demoralised one. By tying their flag to closely to the union leaders, they left themselves isolated from the best elements of the working class and hampered themselves for some time to come.

Hyman and Hinton argue that it the CPs strategy should have been one that allowed them to strengthen their own organisation to better ride out the coming storms. But the mistakes made by the CP stemmed in large part from mistaken analysis as well as the degeneration of the political leadership of the Communist International. Socialists cannot abstain from the struggle. The best way of building a revolutionary cadre is not to sit isolated, reading Marxist tomes, but to engage with the movement and further develop the ideas and theories that you have. Theory is important, but it must breath and grow as part of the class struggle. Hyman and Hinton here are arguing against a revolutionary strategy that involved engaging with the working class and, in part, I suspect they were penning a justification for their own trajectory out of revolutionary politics.

I've devoted a lot of words here, to a very short book. In part this is my own attempt to grapple with a similar political situation in Britain. The study of the 1926 General Strike and the actions of the best militants who were organised in the CP is important so that we can avoid similar mistakes in the future. For that reason, this short book deserves to be read, but it should be read in conjunction with other writings, in particular the Duncan Hallas article linked above, but also some of the books mentioned below.

Cliff & Gluckstein - Marxism and Trade Union Struggle: The General Strike of 1926
Dewar - Communist Politics in Britain: The CPGB from its origins to the Second World War
Trotsky - On Britain