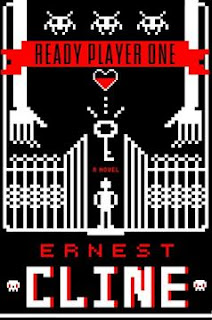 If I was being brutally honest, I'd say that Ready Player One is a vehicle to deliver a particular kind of self-satisfaction to a geeks of a certain age. Or at least those who'd like to think they are. While the story is quite novel, the real satisfaction in his book is spotting and getting the references. As a result the story has a number of plot holes, or deus ex machina which complete the story. But that's not the point. Ready Player One is the sort of read that takes the reader along, rather than trying to deliever a fully rounded plot.

Set in the fairly near future, Earth has become an over-populated, ecological disaster zone. High prices for fossil fuel have meant that the vast majority of the world's population rely utterly on government handouts to survive, or a life of crime. As always a few have made it very rich and corporations run roughshod over people in order to maximise their profits.

As a solution to this misery, a ruclusive video-game designer, obsessed with the culture of the 1980s, creates OASIS, an alternate reality world. This multi-verse has many planets. Players can go to lessons there, move around the planets and, should they earn credits and XP, they can in turn purchase upgrades and expansions, giving them more powers and abilities. OASIS itself is a fully functioning alternate reality. Sex, violence and work exist here. Avatars fight each other for money and prizes, rather than merely points. The creator, James Halliday became the richest man on the planet, and his libetarian, benevolent views have sought to keep OASIS accessible to all.

With his death, Halliday unveils a quest. Those who find the hidden Easter Eggs can inherit his vast fortune. Such a implausible hope inspires millions of people to spend their lives mastering 1980s culture to search out and understand the clues in the hope of freeing themselves from poverty. Of course the corporations too are in on the games, they can afford to pay underlings to learn about obscure computers games, or the lyrics to 1980s songs.

And its here that this bizarre plot actually works. Rather than this becoming some strange work of fiction based on a World Of Warcraft storyline, the internal references to Midnight Oil (The Beds are Burning), the awful sequels to Indiana Jones (post Crystal Skull) and so on are enough to hook those of us who remember the 1980s, or some of it. There is also plenty here for the contemporary geek - who wouldn't vote for Cory Doctorow to be in charge of their online multiverse?

The rag-tag bunch of social misfits who try and solve the clues and win the prize, the vision of the internet / OASIS as some sort of anarchic alternative to reality and the faceless corporations that kill on a whim are not particularly new, but Ready Player One works, rather surprisingly and make for an amusing Back to the Future type of distraction for a few hours.
Posted by Resolute Reader at 4:03 pm