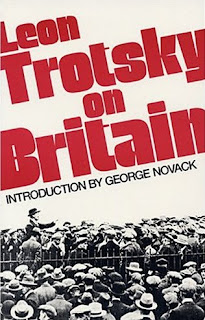 Leon Trotsky is of course, best known for helping lead the Russian Revolution and creating the Red Army to win the Civil War. He was also someone who took great interest in history and current affairs. His belief in the socialist future, and his internationalist outlook contrasted him to the growing clique around Stalin who, after the failure of revolutions in Europe in the early 1920s, turned increasingly towards the idea of Socialism in One Country.

Trotsky wrote a number of polemical pieces and books aimed at communists in other countries. This collection of essays begins with his book "Wither Britain" and includes extracts from a several reviews (almost all of them hostile) and a critical introduction by a British Labour leader. The later parts of this are Trotsky's responses and further writings, dealing in the main with the role of the Anglo-Russian Committee and the attitude of leading communists in the Soviet Union towards this body. The ARC was a co-ordinating group between leading British trade unionists and parts of the Soviet's international bodies. Designed to support the Russian Revolution at a time of isolation, it was also seen as a way of helping strengthen socialist forces in the UK. Trotsky's polemic here is aimed at the forces around Stalin who increasingly saw the ARC as being a way to help defend the USSR from intervention and economic isolation, rather than as a tool for revolution.

This attitude helps explain the earlier parts of the book. Trotsky attacks the sacred beliefs of many leading British Labourites and socialist. In particular, he opposes their arguments of non-violence (or pacifism) and the concept of gradualism. These arise, he says, not because of any inherent differences between the British national character and that of workers abroad, but because they are fundamentally opposed to the action struggles that are needed to over throw the state. As his writings get closer to the 1926 General Strike, from afar, Trotsky's view is much clearer than the so called socialist leaders in the UK. He can see the preparations being made for class-war by the capitalists. The British leaders, he points out, are enjoying too much their new found positions at the head of trade unions and in parliament.

The inclusion of articles by his critics, including Ramsay MacDonald, George Lansbury and Bertrand Russell is useful, because it shows how bankrupt their politics already were. They constantly argue that Trotsky's book is interesting and entertaining but shows no understanding of the life of British workers, or the nature of the movement. They urge him to acknowledge the role of the progressive church, of gradualism and the better relations with capitalists here. Trotsky, in response, points out their own lack of understanding, the bankrupt nature of the church and the failure to understand the way that the British ruling class was prepared to maintain its position by making workers pay. Something all too familiar today. Britain is different they plead, no it is not responds Trotsky, speaking to those who had already broken from the reformists but lacked clarity from their own leaders.

Trotsky's major problem is the fledgling nature of the British Communist Party, founded only a few years before the General Strike. The CP was, at its beginning, hampered by sectarian attitudes from some of its constituent members. Despite the bravery and commitment of many of its members, its small size and its distorted politics (in particularly, its belief that it was possible to win the Labour Party to socialism by leaning on the leadership) was to lead to disaster during the General Strike. The Russian leadership of the Communist International did not help much, in part because of their lack of understanding of the nature of trade union bureacracies, steming from their lack of experience in this field. Tony Cliff and Donny Gluckstein have discussed this in detail elsewhere.

Trostky's polemic is shaped by the recent disasters in Germany. Time and again he returns to the need for a mass, revolutionary organisation, capable of working with, but independently of the trade union and Labour leaders. One of the strengths of the book is seeing how Trotsky was coming towards a detailed grasp of the United Front tactic. However even Trotsky's brilliant mind is, occasionally confused by the reality of the Labour Party.

Ultimately, the sell-out of the 1926 General Strike by the union leaders seems to have come as a shock to the commentators overseas. Trotsky and those around him no-doubt hoped that this was the very beginning of the British revolution. Instead it was to herald a period of defeat for the British workers. The mistakes made by revolutionaries no had a far greater impact. The failure to break with the ARC in the aftermath of the sell-out, was one side of the coin. The other side was the way that the British CP put all its hopes in the General Council of the TUC. For Stalin, the way forward was now to appease the capitalist powers and build up the economic strength of the USSR. But this strategy helped to lay the path for the defeat of revolutionary movements in China and Spain. Trotsky's brilliant analysis in this book, shows the beginnings of his increasing break with the official politics of the CP and the twists, turns and betrayals of revolutionary movements that Stalin would now take.

Trotsky - An Appeal to the Toiling, Oppressed and Exhausted Peoples of Europe
Cliff - Trotsky; Towards October 1879 - 1917
Cliff - Trotsky; Sword of the Revolution 1917 - 1923
Hallas - Trotsky's Marxism
Choonara - A Rebels' Guide to Trotsky

Posted by Resolute Reader at 3:18 pm