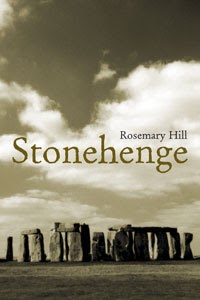 It is rare that I express disappointment with a book. Usually I am aware enough of the contents to feel that I know what I am about to read, so it is unusual to find myself criticising one.

However, it may be that my own criticisms of this book are misplaced. The Wonders of the World series has been extremely enjoyable and I would encourage others to read these short books. There are links to previous reviews below.

Rosemary Hill's book though suffers from not really being about it's subject matter. Now this is true of all the series to a lesser extent. You can't really discuss the Temple of Jerusalem or the Colosseum without mentioning their impact on society and cultures that have come along after they were built, or destroyed.

But this book on Stonehenge suffers from seeming to barely mention any detail about Stonehenge at all. Apart from the very first chapter, and some of the later chapters which deal with modern archaeology. We learn very little about the monument itself. Hill is correct of course to point out that there are many unknowns about Stonehenge. Any book about the place could and indeed should point to the controversies that still exist. Instead we're treated to large chunks about the influence of Stonehenge on various different cultural stages of British history - the Antiquarians, The Romantics and so on. Stonehenge as an idea, has had a big impact - its influence extended to the architects who put together major bits of Bath and Covent Garden for instance.

Hill tells this story particularly well, but I for one found myself not really caring much. The various different suggestions about the origins of the monument that have been put forward by various scientists, amateurs and crackpots over the years are also interesting, but they reflect more of contemporary history, than illuminate the past.

However, I do think Hill does her story of Stonehenge well. I can't fault that, and I did enjoy her account of the more recent history of the monument - the changing social attitudes to conservation of ancient places, access rights and so on. Her final chapter has plenty of ammunition that can be used against recent governments (including I think the Coalition that is in place while I write this) for their attitudes to places like Stonehenge.

But I did feel disappointed. There should have been more about Stonehenge itself and the people who built it, as well as the epic monumental landscape that it is a central part of. Readers who might like more of that, are encouraged to search out Francis Pryor's excellent book Britain BC, which delves into some of this.