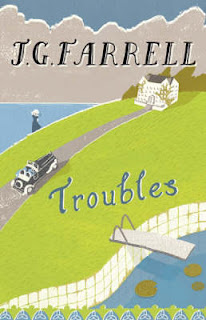 I thoroughly enjoyed reading Farrell's book The Siege of Krishnapur and this earlier book of his does not disappoint either. Apparently this is really the first in a trilogy of which Krishnapur is the second, but there are limited links between the stories, so the order doesn't matter.

Together with the third in the series, the theme is the end of Empire. Krishnapur appeared to deal with the highpoint of British rule in India, but was centred on the mutiny that marked the beginning of the end. Troubles is set in Ireland, in the immediate aftermath of the First World War and the Easter Uprising of 1916.

Arriving in Ireland, Major Archer thinks he is going to be married to his fiancee. A young woman with whom he has engaged in a love-affair by letter, following a short meeting. That doesn't happen and instead he gets drawn in to the daily life of the Majestic Hotel that is owned by her family. The Hotel was once a splendid and famous resort. Now, it is a shade of its former glory. Decay permeates every corner - the masonry is crumbling, the gardens getting overrun. This decay is also infecting the people there. The servants don't care - The Major is not met on his arrival, and the first comic chapters of the novel are when he tries to adjust to the idea that no-one will make his bed and no one will run his bath.

The decay of the hotel is a metaphor for the decay of British rule in Ireland, or indeed the beginning of the end of Empire. As the Civil War gathers pace, the guests at the hotel remain blissfully above it all. Sure that the Empire will continue, and unbelieving of the growing tidal wave of change they face. As in Krishnapur the natives are distinct, indistinct figures. Starving on the periphery of the story. This is how they must have appeared to the British, enclosed in their ivory towers.

As events hot up, the Major becomes unable or unwilling to leave. He falls in love again, and his heart is broken once more. Here, in addition to the dark gloom of the crumbling hotel, Farrell adds the  claustrophobic life of a Englishman unable to cope with his sexuality, desperate for relief as he sweats at night thinking of the woman he loves. But there is a counter-point. Two young girls who mature into woman as the novel progresses, taunt, flirt and tease the visiting British soldiers and the Major himself. They surely represent a more confident sexuality of the coming twenties.

The end of the novel, is, like the end of Empire, brutal. There is little happiness here, and I was left feeling that there should have been something more. But this is the end of Empire from the occupiers point of view - they deserved no happy ending. It is up to those who freed themselves to write the next chapter of the story.

J.G. Farrell - The Siege of Krishnapur
Posted by Resolute Reader at 4:27 pm

What a great review. Many telling points made concisely. I found the description in the book remarkable. The characters were well done in that they showed differences between people 'on the same side'and the central character was a complex man on the wrong side who I felt sorry for. Many thanks for analysing this book so sharply and reminding me of a great read.

Thanks for your kind words.