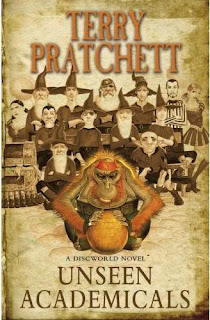 Capitalism is very adept at taking old traditions, remoulding and repackaging (and occasionally reinventing) them in its own interests. These interests are usual those of short term profit, but they can also be in the interest of propaganda, or the creation of ideas of nation or racial superiority. One of the things that has been adapted and distorted by modern society are the games that communities have played. From traditional games played in working class communities or on village greens, multi-billion pound international sports have been created.

This is perhaps most obvious with football and in his latest Discworld novel, Terry Pratchett satirises the process extremely well, adding in his usual comic mix of magic and chaos. Pratchett has the eye for a good opportunity for satire. In my opinion football is worthy of this, not least because of the way that it is already fairly funny. It's million pound players, who seem to have little of worth to say, the entourage of glamorous wives who follow these players around and gather such bizarre press attention. The strange customs of the fans and the odd little traditions. All of these are stretched and distorted by Pratchett.

In the novel, football is a mass participatory sport, enjoyed mostly for the opportunities for fighting between the groups of fans. Huge crowds swell the streets, there are limited rules to the actual game and the state (via the medium of Ankh-Morpork's Watchmen) have little or no control on match-days. Games are the occasion for much anarchy and revelry. Much like the original football "matches" here in Britain.

Such anarchy needs to be brought under control and the city's leader Lord Vetinari does what rulers have done through the ages. He brings the game under his wing, offers it reward and respectability and fashions order from chaos. No matter that the games has lost its real roots, it is now a method of control and profit.

Pratchett does all this well. By setting up the comic figures of the city's Wizards as a new football team the story has some roots. This unlikely idea is designed to attract those readers who already have pictured the new players as over-weight, lazy academics. But this need to be in the know may well confuse newer readers.

Here again is a criticism I've previously made of Pratchett's more recent novels - because they come across as formulaic, they aren't as amusing as they used to be. There are fewer laugh out loud moments in Unseen Academicals. The characters all have their predetermined parts to play, and us regular readers will come to expect them to have their walk on parts sooner or later. There are a host of new individuals, but they seem to flit onto the stage and leave without leaving us with much.

Pratchett is a brilliant writer. We'll all continue to read his books even though they are now weaker than they were, not simply out of loyalty but also out of genuine love. But there does seem to be something increasingly missing from them.

Great website! I love the categories of books you have... and thank you for the review - much needed!

To each his own. I rather liked the reappearance of a forgotten goddess, Ridcully realizing that "the servants" had minds, and the redemption of a hated and feared group of created beings (two, really, if you pay very close attention). Seeing Vetinari drunk was fun, and oh yes, there was some kind of game involved.