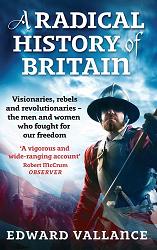 Before anything else is said about this book, the author should be congratulated at the very least, for attempting this monumental task. Anyone trying to get to grips with almost 800 or so years of radical history has set themselves an enormous job. To cover everything, even in 551 pages would be almost impossible, to do what is covered justice would take a historian of some note.

What is good about this book then, is the sense of rescuing a hidden history. The moments in Britain's past when men and women took it on themselves to attempt to change their world. Sometimes this was in small ways - local protests and uprisings. Sometimes they tried to overturn the whole world order. And we should learn this history - the story of the Peasant Revolt of 1381 has its lessons for today (don't trust the ruling class when they are forced to negotiate) for instance. To bring the stories of the English Revolution, the Levellers and the Diggers, the struggle for the vote, the battles for rights and justices is an important task. I hope that many people learn about these struggles from Vallance's book and take the time to delve deeper.

That said, the book itself is an immense disappointment. In part this is because the book is so large in its scope. Important points of history often receive only the briefest of mentions (more on that later) and sometimes Vallance (as with his discussion on the English Revolution) sticks to a very mainstream retelling of the history.

Another problem is the author's focus. All too often this radical history is a history of key figures or big names. I rarely felt I was hearing the voices of the ordinary people most affected by what was going on. That's not to say that people like Tom Paine, the Pankhurst's or the leading names of the Revolution aren't important. But moments of great radical change come because there are social forces moving, and they move because of other factors.

Why did women want the vote? What made people join Cromwell's forces? How come people marched to Trafalgar Square to demand the right to assemble in the 1890s, but not 10 years before hand?

To be fair, Vallance might say he wasn't writing a "People's History". That's a point, but by definition a radical history has as it's focus, changes to the system that are in the interests of the ordinary people at the bottom of society, rather than those at the top. But even so Vallance is selective in his choice of important radicals. William Morris gets a few pages, the Pankhurst's get whole chapters. King Alfred, rather bizarrely gets a good chunk. But there are strange omissions - George Lansbury gets a couple of oblique mentions, despite putting himself at the head of one of the largest radical revolts in recent history.  John McLean gets a passing mention (Scotland is barely discussed) and Communist MPs like Phil Piratin or William Gallacher, who lead real mass movements, aren't discussed.

Perhaps these references reflect my own orientation on the history of Britain as seen through the eyes of a Trotskyist. But what about such figures as Owain Glyndŵr or William Wallace who must surely fit into the broadest definition of radical. Even Gordon Brown is referrenced more times than William Wilberforce (a figure that most liberal historians would consider fairly radical - Wilberforce that is, not Brown). Actually it's a great crime that the entire struggle against Slavery is missing.

Then there is the detail. It shold be said that the book gets worse the closer we get to contemporary times. The earliest chapters, particular those on the Peasants Revolt and the periods around the French Revolution are well written, though the chronic lack of references makes it difficult to learn more. The chapter on the English Revolution is very complex and difficult. If you don't know anything about this particular period, it is not a good place to start at all, painted as it is as a battle dominated by religious arguments.

But because Vallance doesn't start from what's happening in wider society, but begins with the individuals at the head of movements he comes unstuck. The struggle for Women's liberation for him, is dominated by the arguments between the militants and the rest of the movement. He concludes that militant action fails to deliver and becomes a hindrance and ends up with a position that implicitly argues that the Suffragettes had to wait for a more friendly government to arrive. No to a point this is true, but what Vallance misses is that the radical militancy stemmed from a movement that had failed to mobilise the mass of working people into it's orbit.

Had the working class movement used its powers to force change, then the battle would have been shorter. The tragedy of the Suffragette movement was that much of it was dominated by a Middle Class leadership who, while brave enough to go to jail and risk their lives, were terrified of wider social unrest that could have forced the governments to listen. Breaking windows gets media coverage, but it doesn't frighten the forces of the state and the descent by sections of the movement into even more radical acts reflects the frustration of this.

Vallance also fails to grasp the wider situation. For him, the involvement of women in the workforce during the First World War was something that came and went, with little lasting impact. He argues that most of the jobs they did were ones that they had before the war, which I don't think stands up to scrutiny (munitions work?) Yet he also misses the way that this changed perceptions of women's roles and their perceptions of themselves - once lots of people had seen women driving buses then they weren't easily going to be able to put them back in their pre-war boxes.

If this wasn't the case, why did so much effort have to be put into forcing women back into their pre-war roles. The creation of women's Trade Unions and involvement of women in the wider union movement on an unprecedented scale certainly changed the working class movement. So by looking superficially, Vallance fails to grasp the real changes in society that were happening.

After the Suffragettes, Vallance has a chapter on the fight against Fascism (which devotes barely 2 pages to the question of Cable Street and the battles against the British Union of Fascists). He doesn't explain why fascism failed in Britain, but was successful elsewhere. Even if you don't believe (as he doesn't) that Cable Street was particularly important, surely the debate deserves more than he offers here. There is nothing here about the Second World War, or even the post-war battles against fascists and the later NF.

But radical history apparently stops for Vallance with World War Two, but even his post 1900 history is severely wanting. The 1926 General Strike gets less than one page. The Great Unrest is by-passed, as is Red Clydeside and the 1919 strikes ("Britain on the Brink of Revolution"). The Russian Revolution apparently had no impact here - the Communist Party being irrelevant. Other missing moments are New Unionism (the Match girls get a couple of paragraphs) and George Lansbury's 1921 refusal to impose Tory economic policies on the poorest sections of British society. I could go on. In fact I will, because students of more recent radical history will be amazed that the mass movements against Apartheid, Racism and Fascism in the 1970s are missing, the union militancy that did for Edward Heath, the Miners Strike, CND, Wapping, the Poll Tax and finally the Stop the War movement of the last decade.

Actually to be fair, Vallance salutes the anti-Iraq war movement in his last paragraph, though he doesn't name it. But he ignores the fact that it also opposed war in Afghanistan. Now I might not expect Vallance to write a work of history that keen readers of Socialist Worker would appreciate, but to miss out the Miner's Strike and CND in a work on the radical history of Britain, is a bizarre error. This is a problem, because arguably the struggles of the 20th Century have shaped our culture, politics and social structures far more than those of much earlier times.

The problem is of course, the one that has beset liberals for decades - the question of the Labour Party. Ultimately this is a history that is about the struggle to get the Labour Party to office, through the enfranchisement of the poorest in society. This means of course, that criticism of Labour is frowned upon and more recent radicalism is brushed under the carpet because it might show Labour in a worse light. Thus the culmination of radical history for Vallance is the building up of the Labour party into a party fit to govern. Towards the end of his book he explicitly says this, arguing that few in Britain's radical history wanted to level out things. In other words, British radicalism is a different beast to that of France or Russia - it is not about building a new world, but creating a nice capitalism, overseen by a friendly government.

By concentrating more on the earliest period of radical history (important though they are) you end up with a book that will be appreciated by Gordon Brown and Ed Miliband. You can look left wing and radical by informing the masses about Wat Tyler and Tom Paine. But don't let on about how Labour failed the miners, or how the TUC has failed the organised working classes time and again. To do that, might have ramifications today, and we can't risk the next General Election can we?

Posted by Resolute Reader at 12:05 am