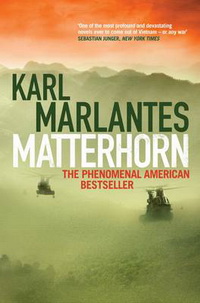 America's imperialist adventure in Vietnam shaped the world we live in today in many ways. The injustice of the most powerful nation in the world bombing one of the poorest "back to the stone age" led to a radical questioning of the status quo, and put anti-imperialism at the heart of the radical movements of 1968 and beyond.
But the internal dynamics of the American system shaped the conflict, which in turn shaped the experience back at home. The racist nature of American society, combined with the rigid class divide between rich and poor was even more acute in the jungles of Vietnam.
Karl Marlantes' book on Vietnam has rightly become a huge bestseller. On one level, the story is identical to a million other Vietnam war novels and films. A young, inexperienced, arrogant young Lieutenant, Mellas, reaches Vietnam, determined that his military experience (and his natural leadership skills learnt at a good college) will stand him well for a political career post war. Leading a company of 200 men in Vietnam would look good on his resume. There's a great little moment in the novel when one of the other soldiers, a black marine, asks what a resume is. Then laughs at the notion that a bit of paper would help you get a job.

This gulf between worlds is quickly overcome for Mellas and the other newbies on the front line. Living in soaking wet foxholes, constantly plagued by leeches, enemy fire and a shortage of food, while being expected to follow the most insane of orders quickly teaches you something about your own army, and your fellow troops. But the Gulf between officers and grunts isn't easily overcome, particularly when those officers rarely leave the home comforts of their command sites, way behind the lines.


The racial tensions, exacerbated by military policy, stupidity and racism from the top link in with the differences between leaders and led to create a toxic mix for the marines. Soldiers quickly question their orders, conflicts develop between their instinct for self-preservation and their training that almost forces them to follow commands. While assaulting a hill they themselves had reinforced only weeks before, Mellas' force looses many of its men. Believing they are poorely led cowards, the Colonel behind the lines orders them to assault a different hill, with barely a moment to recover their losses. The novel builds to a climax were all the contradictions, tensions and racism come together rather explosively.

One noticeable thing about the book is how little the other side figures. Vietnam exists merely as a backdrop to the story. The enemy are anonymous figures, barely seen close up. What the war is in aid of isn't mentioned ("Show we were the gold is... or the oil" complains one marine"). This is a novel about internal relations, external ones are almost, and ironically, unimportant.
The fact that Marlantes book is a best seller no doubt has something to do with the war that the Vietnam war has impacted on the US psyche. But it must also be because there are some enormous parallels between that unwinable conflict and more contemporary wars in Afghanistan and Iraq. The tensions that existed amongst the soldiers in Vietnam are no-doubt there in the Middle East today, though on a much smaller scale. The incredible racial and class differences that dominate US society remain as much of a problem for the establishment today, as they were in the 1960s.
If I was part of the US establishment, I'd be very worried indeed.
Posted by Resolute Reader at 10:11 am