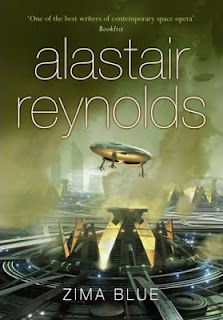 This months overindulgence in Alastair Reynolds' science fiction continues with this very recent collection of short stories. Rather like some of the collections of Isaac Asimov's early work, the author mingles in comments on how the stories came to be written and published.

Shockingly, however I have to admit to not being that impressed. Similarly to the most recent novel Terminal World, Reynolds has chosen stories that aren't particular in the realms of his larger space opera. With the exception of three linked tales at the heart of this book, most of the fiction deals with near future or contemporary times. One stories, as the author admits, contains no elements of science fiction at all, simply a meditation on quantum mechanics and the many worlds theory.

This shouldn't matter, but some of these tales come across as very weak. Partly I think this is because they fail to engage with the world we live in. Badly written though they might be, many of Isaac Asimov's stories worked precisely because they could link with our own lives.

Two stories that do work well, do so precisely because they manage to link into our own world. "Signal to Noise" and "Cardiff Afterlife" are set in world's where we can communicate with other alternative universes. The Many World's theory is a theme in this collection. In these universes we can talk to and encounter our ownselves after the universe has branched from our own. Cardiff Afterlife deals with two universes, one where Cardiff has been destroyed by terrorists, the other were it survives. Reynolds imagines future anti-terror agents abusing the link to interogate criminals who perished in one reality and not the other.

The three linked stories I mentioned earlier are a return to wider grand standing sicence fiction. They deal with the quest for a super weapon to save the human race. It was only after finishing the third that I noticed that the character at the centre of the stories, Merlin, is engaged in an almost Arthurian Quest. It's this sort of large scale SF that Reynolds excels at, and these three stories make the collection worth having for his fans.