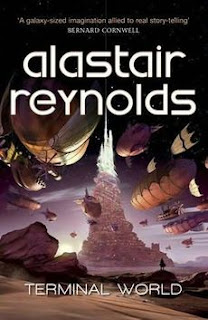 With his latest novel, Alastair Reynolds turns away from the galaxy spanning tales of much of his previous works. This time he is Earth-bound, indeed this novel is mainly centered on one city. Spearpoint is an enigmatic place - stretching high into the upper atmosphere, it is clearly deliminated into seperate areas. These areas of varying technological sophistication are kept seperated by an unknown and unexplained force. This means that the different zones don't allow technologies from different regions to function there. You can't bring an internal combustion engine from "Neon Heights" to "Horsetown" without it seizing up. Guns, clocks and every other mechanical device slowly stop working if taken to an area of lower technological development.

Humans travelling between these zones also suffer adversely, but because they aren't mechanical, they can, to a certain extent heal. This process requires medicine, which is in short supply.

The bulk of Reynolds' story deals with the collapse of Spearpoint due to a shift in the boundaries of these zones. The hero escapes and brings together a fleet of dirigibles (not blimps as the pilots insist) with medicine.

On his website, Reynolds describes the novels as "a far future, steampunk-influenced planetary romance about the adventures of an exiled pathologist, and a city in need of medicine..." It's a fairly apt explanation, though existing fans make find it a little light compared to his earlier works. While I enjoyed it, I felt that Reynolds was trying a little too hard to get lots of ideas into the book - in Horsetown people wear wide brimmed hats, like cowboys - the upper zones are populated by "angels" - humans who have the ability to fly.

The end of the book is a slight disappointment, as it seems entirely about setting up a sequel, something that I hate. In particular, I was left feeling that none of the great unknowns about the novel were even close to being tied up. My interest was held by the strangeness of the world that Reynolds was describing. It was a disappointment that there were no answers. Perhaps the author had none.
Posted by Resolute Reader at 8:37 am