The heart of Venice, the Piazza San Marco is properly considered one of the most beautiful centres of a city anywhere. Its history is inseparable from the history of Venice - it is here that city leaders met, invading armies occupied, rebellions focused and visitors - pilgrims at first and tourists in more recent times - have gathered in their millions.

For the author though, there is a dangerous tendency to see the Piazza simply as a lovely square surrounded by individual buildings - the Doges' Palace, the Basilica of San Marco and the Campanile tower for instance. Rather, he argues, we should see them as a collective whole that has evolved over time, to encapsulate Venice as a place with a history.

This history is surprisingly complex, though mostly it centers on Venice's unique geographical position that allowed its merchants to become fat on the wealth generated from being a maritime power near the juncture of the West and the East. Its Churches brought in wealth by becoming the focus for pilgrimages to see the extensive collection of relics. Today less than 60,000 people live in the city. The millions of tourists are served by a visiting population, unable to afford to live in the city, but their dollars or Euros are no less sucked up by the city. 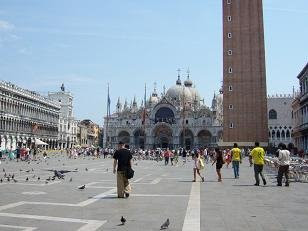 In some ways, Venice is remarkably artificial. No more so than in the constant worry that it will sink beneath the lagoon if left to nature. But its history is also unnatural. To justify their wealth and power, the city's rulers had to invent a host of traditions and myths to explain the city. Many of these lasted centuries, even now receiving an echo in tourist guides.

Fenlon shows how the city's decline in the Napoleonic era led to its re-discovery by modern artists and writers, for whom Venice came to symbolise some mythical romantic ideal. The city being "raised from the spoils of the teeming Orient" wrote Disraeli. But for others the city symbolised decadence and decay, perhaps most artfully visualised in Visconti's film of Thomas Mann's Death in Venice.

Today Venice is the ultimate tourist trap. Its history seems oddly remote and immaterial, a backdrop to a ornate decorations and art collections. Iain Fenlon has done a service to bring it to life for the casual reader and for those who would like to visit the city and have some idea of whence it came.