Peter Linebaugh - The Magna Carta Manifesto, Liberties and Commons for all 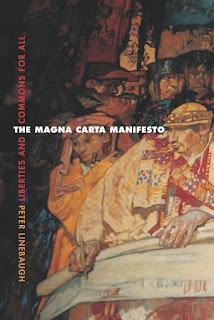 Peter Linebaugh's sweeping history of Magna Carta, one of the founding documents of law couldn't come at a better time. This ancient text, with its limits on tyranny, its prohibition of torture, its securing of the right to trial by jury and of course, habeas corpus, has never been needed so much. Under the guise of the war on terror, many governments have sought to undermine these ancient rights and in the first instance Linebaugh's book is a rallying cry to defend them. It is with a only a limited irony that the author can quote a legal expert recently saying "If anyone had told me 20 years ago that fighting for the rights in Magna Carta or the rule of law would be seen as revolutionary behaviour, I would have laughed."

However, Linebaugh's history shows us something else. Magna Carta has always been a battleground - it evolved out of the struggle between the Barons and King John, and its interpretation has been used by everyone from those who would fight for liberty and freedom, to those who would establish the free market in the New World and justify slavery.

Through the book we read of rebellion and counter-rebellion. From peasant revolts to lawyers seeking to prove the slave trade illegal, it takes many forms. But often what marks the rebellion is Magna Carta. Sometimes it's quoted legally, sometimes it's inscribed on banners or referred to in rhetoric. It's always part, however, of a collective consciousness.

Sometimes the book is hard going. Linebaugh's florid style can be hard to follow and sometimes I felt there was a certain expectation on the reader having some legal knowledge. Nonetheless, there is much here for a casual reader. Linebaugh is on of the best contemporary historians in the "history from below" school, and deserves a read.

Peter Linebaugh's explicit reason for writing this history is to put the idea of "the commons back on the agenda of the political constitution". In other words, the concept of collective rights, of equal access to resources and land, of social organisation and living must be part of our future, just as it is part of our past.

Linebaugh - The London Hanged: Crime and Civil Society in the Eighteenth Century
Posted by Resolute Reader at 9:42 pm