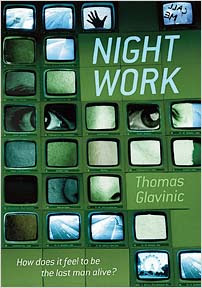 How was it that Winston Churchill described the former Soviet Union? "A riddle wrapped up in an enigma". That is a very good description of this complex, yet strangely simple novel.

The plot follows that popular brand of apocalyptic science fiction that this reader is particularly partial too. In these books the hero of the novel awakes to find himself the last person alive on the planet. Civilisation has been decimated by plaque or some other holocaust and the plot follows the desperate attempts of the survivors to continue their lives. Often re-creating their former existence until the electricity fails or some other such stark metaphor for the end of civilisation.

Glavinic hasn't really written that sort of story though it does start out like so many of the others. Jonas wakes in Vienna. His normal routine is only interrupted by trivial matters - the radio fails to find any station, the newspaper hasn't been delivered. It's only while waiting for his bus to work that he realises that there is no traffic. No noise. No people.

Much of what the author describes is the desperate attempts by Jonas to come to terms with what has happened - his girlfriend away in Britain doesn't answer her telephone. But he regularly calls her anyway. His internet connection fails immediately, yet the electricity continues uninterrupted, so Jonas is able to explore the world that he might be normally excluded from without worrying about finding food or getting trapped in a lift.

There are some deeply chilling moments - mostly as you try to solve the puzzle over what has happened, but the most scary for me (at 2am!) was the reference to the old ghost story about the last man alive in the world who hears a knock on the door. What would you do when you know there is no one else in the world beside yourself and the telephone rings?!

Jonas gradually goes mad. I think this is a clear element to the plot line but is missed by many other reviews of this wonderful book. It's clear that he behaves rationally but his mind cannot cope with the huge transformation that he has gone through. He becomes obsessed with the reality of his situation. Does the world really exist when he isn't there? Does a 'phone ring when there is no one to hear it?

Installing video cameras around the city he watches himself and the empty streets. Disappointed to find that while the streets are there while he is absent nothing else changes. In his frustration he turns the cameras on his sleeping self and witnesses his alter-ego "The Sleeper" wake and move around, waving a knife, behaving oddly.

Now of course comes the crisis of self belief. Who is this other person? Which of course begs the follow up question - who are we really? On a long road trip to find his former girlfriend, "The Sleeper" spends the night reversing the long distances travelled leaving Jonas to repeat the trip over and over again in a struggle with himself.

The ending is, as many have pointed out, disappointing. But it is appropriate. This is not a novel with a plot line - rather it is a study of the self. The battle to understand might be lost, but Jonas wins his struggle to stay human.
Posted by Resolute Reader at 4:34 pm

I will have to read this book. It sounds a little like the novel 'Grand Solo for Anton' by Herbert Rosendorfer.

Read this book and liked the effort it made, but a little strained in both philosophical presentation and literary style. No new concepts here, but presented in a nice way. Resolution was predictable yet well done. Self-referential innuendo at end was a little too heavy, especially in light of previous existential novels eg. Pig Tails, Nausea. Definitely creepy, though. A great psychological thriller. Would read a second time.

That part about the Sleeper reminds me of this fantasy book I read once. There was a centaur character that had two human parts- and they each wanted to go to a different place. So when one half was sleeping the other would walk them one direction, and when he fell asleep the other half woke up and walked them back. They never got anywhere.