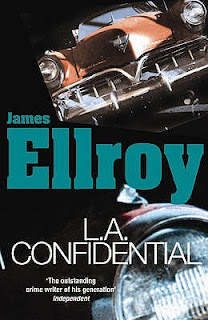 Something struck me towards the end of this classic crime novel - no one in James Ellroy's world is "good". Everyone has a flaw. There are no heroes, only victims. There are of course innocent bystanders, but you get the impression that the people killed in the mass murder at the Nite Owl café are probably guilty of something, if only the author had got around to telling us what it was exactly. This is perhaps fitting for this convoluted story which mixes murder, police brutality with a web of sex, pornography and political corruption.

The two main police characters, carry their personal flaws through into their police work - Bud White for instance carries a hatred of wife beaters - or indeed anyone who brutalises women. His police work often spills over into vigilante action against the perpetrators of such violence. Many of the other officers are prepared to bend or break the law to further their own careers - all of them hold racist ideas against the city's black community. How realistic this all this is difficult to say - certainly it is a far cry from many detective novels, with squeaky clean heroes and stereotypical baddies.

The complex plot reflects perhaps the reality of corruption - the web of intrigue that drags dozens of people into illegal activity. And their is a ring of truth to the nasty racial attitudes of the policemen. Apparently, some of the key moments in the book are based on historical events. In particular, this scene of police brutality, which shapes the novel at the very beginning. It is an enjoyable read, though not necessarily a pleasant one.

James Ellroy is easily the greatest American writer in the last thirty years. That his chosen genre is in crime fiction means many people have missed out on his sheer brilliance. The "L.A quartet" and "American Tabloid" are revealing snapshots of a America which many of its' citizens would prefer to forget. It is interesting to note that he has a massive influence on emerging UK writers, than on his home turf. But it goes to show that prophets are rarely recognised in their own lifetime... Long may he continue to upset and ruffle the mainstream.