Fredrick Engels - The Condition of the Working Class in England

Before he became Karl Marx's friend and closest collaborator, Frederick Engels had already achieved more in his life than most philosophers do in decades of thinking. This book, his first major work, is nothing less than a classic work of social investigation. It wasn't the first book to document the poverty and alienation of the emerging working classes, but it was the first to do so with an explicit attempt to understand the role of workers under the newley emerging capitalist system. In part, this was to explain and document this new social situation for those outside England where industrial capitalism had yet to take hold, but in part it is clearly a stage of Engels' thinking as he grasps towards the theory that would ultimately become Marxism.

The major parts of the book that deal with the conditions of people's lives in the mid-1800s are horrific. Walking the streets of Manchester today, it's impossible to comprehend the lives of those who lived in the slums that made up so much of the town. Engels mainly looks at Manchester as it was both the city where he worked (in his father's business) and the foremost industrial city of the world.

One brief passage would serve to get a taste of Engels' descriptive powers:

"In one of these courts there stands directly at the entrance, at the end of the covered passage, a privy without a dorr, so dirty that the inhabitants can pass into and out of the court only by passing through foul pools of stagnant urine and excrement...... below it on the river there are several tanneries which fill the whole neighbourhood with the stnech of animal putrefaction."

This description of the area around Ducie Bridge in central Manchester continues in this vein for many paragraphs because this was typical of working class areas of the time - left, effectively to rot.

Themes that are to become central to the Marxist thought that Marx and Engels develop later are touched on here. The atomisation of the worker that leads him or her to compete with others, turning them against those who should really be allies.

Talking of London he writes "The dissolution of mankind into monads of which each one has a separate principle and a separate purpose, the world of atoms, is here carried out to its utmost extreme"

The role of the family as both a haven from the horrors of working life and a source of pain, stress and suffering. The way that physical work distorts both physically and mentally, and the way that the factory owner makes profits from the exploitation of the thing that makes the worker human. 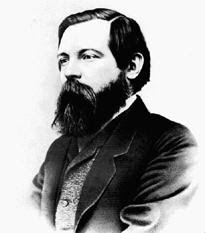 In the 1840s, Manchester was a source of immense profit for a few capitalists. Yet none of this significantly improved the lives of those who created this wealth. Engels' documents the medical and scientific reports that show how human life was stunted and deformed by the repetative, back breaking jobs. Constantly in this work, we find Engels raging at those responsible for the wretched lives of the workers.

"During my residence in England, at least twenty or thirty persons have died of simple starvation under the most revolting circumstances, and a jury has rarely been found posessed of the courage to speak the plain truth in the matter. Let testimony of the witnesses be never so clear and unequivocal, the bourgeoisie, from which the jury is selected, always finds some backdoor through which to escape the frightful verdict, death from starvation".

Engels' hatred of the consequences of capitalism and the rise of these giant industrial cities lies alongside his understanding that for a socialist society to emerge the force to create it must be created. He understands that only in these industrial towns does the concentration of economic power in the hands of thousands of men and women give the proletarian movement the hope of success. To this extent the book is also a celebration of working class revolt. However it's in this context I mention one thing that slightly surprised me - this is Engels' description of the Irish in the book.

Marx and Engels, writing years after the completion of this work, understood that the racism directed towards the Irish was a huge weakening factor in the unity of workers. It damaged their movement, distracted from the real enemies and was artificially stoked by the media and the ruling class of the times, for precisely those reasons.

However in passages in this book, the young Engels certainly echoes some of those prejudices.

"These Irishmen who migrate for fourpence to England, on the deck of a steamship on which they are often packed like cattle, insinuate themselves everywhere. The worst dwellings are good enough for them; their clothing causes them little trouble, so long as it holds together by a single thread; shoes they know not; their food consists of potatoes and potatoes only; whatever they earn beyond these needs they spend on drink. What does such a race want with high wages?"

Given that this is could be the worst racism directed at more recent immigrants to these shores, it's important to venture the opinion that this was very much Engels at a young age. His ideas were not fully rounded and perhaps he reflected the awful prejudices of the time, and his class (he was after all from the factory owners, not the factory hands). Later in his life, he explicitly rejected such ideas and indeed had a lifelong relationship with an Irish woman, Mary Burns.

The work is clearly an important one, not simply for the documentation of the life of the workers of early capitalism, but for an understanding of the development of Marxism and also to show that Frederick Engels, a man who all to often stands in the shadow of his friend and collaborator, was also a man of formidable skills.

For those who would like to know more about the life of Frederick Engels I would recommend this article by Lindsey German.

Engels - The Condition of the Working Class in England
Hunt - TheFrock-coated Communist: The Revolutionary Life of Friedrich Engels
Posted by Resolute Reader at 9:25 pm