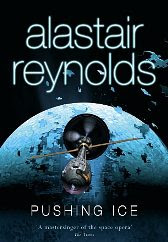 This is the first Alastair Reynolds work that I have read that isn't set in his future history set in the so called "Redemption Ark" universe.

It's really a three part novel that starts moving very slowly and gathers pace, until the end, which is extremely fast moving. This is only in part due to the immense acceleration in space/time that the principle characters experience.

The title refers to the particular employment of the "Rockhopper" and her crew. Rockhopper is a fairly beaten up space-craft that really could do with a re-fit (think the space-craft in Alien for instance). It's crewed by a dedicated band of miners whose job is to manouvere comets into earth orbit.

The opening chapters describe the fairly mundane work that goes on, until Janus, an unusual moon of Saturn, starts to leave the solar system. Clearly under some form of alien propulsion, Rockhopper and her crew give chase. They're the only humans near enough to possibly get close to the rapidly disappearing Janus.

What's interesting, is that while this is a fairly normal plot device for SF (remember Rendevouz with Rama and its sequels anyone?) Reynold's adds some interesting twists. Firstly, unlike Arthur C Clarkes famous book, the people who explore Rama, sorry Janus, are very much fleshed out characters. The main storyline, other than humans travelling across the universe trying to investigate strange alien space craft, is that of the conflict between two women for control of the space craft. There aren't really any good or bad people in this - just those who have difference ideas of how best to save their own lives, but this makes for a much more human SF than normal.

There is, disappointingly little information on what the Janus spacecraft is eventually. I kept hoping for some big explanation about what was going on. When it finally comes, the story has, to be honest moved on to a different arc, and dramatically changed it's course. So I felt it was a little lacking in clear explanations to why a moon of Saturn suddenly left the solar system at great speed.