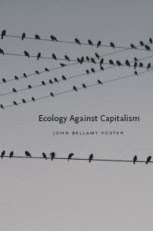 This collection of essays on a general theme of capitalism and the environment was first printed in 2002, though all the essays are from the previous decade. They predate, but predict many of the arguments that are emerging on the left (and within the wider environmental movement) as issues such as Global Warming become a serious mainstream political issue.

Bellamy Foster is excellent on this question, which is approached from a number of different angles in the different essays. He examines for instance, how economists attempt to make the environment part of the market, so as to make a profit from it. He quotes Marx:

“For the first time nature becomes purely an object for humankind, purely a matter of utility; ceases to be recognised as a power for itself; and the theoretical discovery of its autonomous laws appears merely as a ruse so as to subject it under human needs whether as an object of consumption or as a means of production”

All the essays are fantastically written, clear, concise and informative. Several in particular deserve particular mention “Global Ecology and the Common Good” is a brilliant counter argument to the idea that “we are all in it together”. “Capitalism’s Environmental Crisis – IS Technology the Answer” looks at whether simple technological improvements or innovations can provide solutions. He examines the so-called “Jevons Paradox” which argues that the consequences of technological innovation in improving fossil fuel efficiency has led to more fuel being burnt (as it becomes cheaper and more profitable to use it), rather than reduction in it’s use.

Finally, the essay which Bellamy Foster wrote to mark the 200th anniversary of Malthus’s Essays on Population is an excellent rejoinder to those who, still today, argue that the environmental crisis we face is a consequence of over-population, rather than an economic system that destroys everything in it’s path in the drive for profit.

Bellamy Foster is absolutely convincing on this. There cannot be a good capitalism, nor can there be good capitalists. The exploitation of the earth’s natural resources, in an inefficient, unsustainable way is part and parcel of the mechanisms at the heart of society. The ultimate “saving of the planet” will only be won, through the destruction of that system and it’s replacement with one based on need, not greed.
Posted by Resolute Reader at 10:29 pm

It's eerie how we plunder the planet and how little of it is left. Thanks for the reading tip.