Thomas Mann - Death in Venice and Other Stories 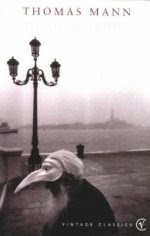 From the evidence of this collection of stories, Thomas Mann was not a happy chap. Or at the very least, he enjoyed discussing the inner conflicts of man, and those emotions that could tear the best of people apart.

Saying that though, Thomas Mann clearly is one of the 20th Century’s greatest writers – his text reads almost poetically, though the subject is often heartrendingly painful.

Here for instance, are the opening sentences from his 1897 short story Der Bajazzo (The Joker)

“The end of it all, the upshot of life – of my life – is the disgust with which it fills me. A worthy ending indeed! Disgust with it all, disgust with the whole thing, this disgust that chokes me, goads me to frenzy and casts me down again into despair – sooner or later, no doubt , it will give me the necessary impetus to cut short the whole ridiculous, contemptible business and clear out for good.”

Such an passionate suicide note at the start of a story, indicates that it might not have the happiest of ending. But the genius perhaps of Mann, is to use such emotions to illuminate the human condition.

The titular story, Der Tod in Venedig, (Death in Venice) written in 1912, far surpasses the other tales in this collection. The story of the aged writer, reflecting back on his life in the glorious city of Venice, while falling in love with a beautiful teenager holidaying there was itself turned by Visconti into one of the greatest films ever made. This isn’t surprising – the theme which mixes the beauty of the city, with it’s rotting core, and the impossible love for a young man with the growing pestilence around them – mixes up just about every emotion that can be thought of in a single tale.

Few can read a work like this without wondering at the inner turmoil of the writer, but whatever the authors own emotions; these are works that make the reader reflect on the very feelings that make us human.
Posted by Resolute Reader at 9:26 am