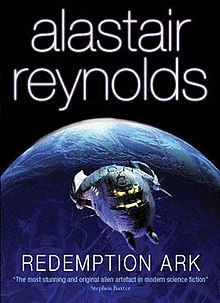 This is science fiction on a grand scale. When I say grand, I mean big. Everything about this novel is big. Firstly it’s 646 pages long. Secondly everything it discusses happens on a huge scale. From the time periods, caused by space's immense distances, to the gigantic “Doomsday” weapons that the various factions in the novel are racing to capture, across immense interstellar space, in gigantic spaceships. I think you get the picture.


In addition humanity is threatened by the rise of the inhibitors – beings with enough power, technology and energy to destroy suns and take planets apart, piece by piece. You can’t imagine a grander enemy.

If you haven’t read some of Reynolds earlier works you might suffer as he brings many strands of earlier stories together in this novel. If you have, you’ll find many of your questions answered – just why the inhibitors do what they do – destroying newly emergent intelligence in the galaxy – in particular.

Alastair Reynolds, in addition to being a bloody good SF writer, is also a trained physicist, and in his case this doesn’t just mean a university degree. It means he worked for ESA and he knows about space and stuff. Which doesn’t of course stop him playing around with faster than light drives and other wonderful future technology. It does however mean, that sometimes the detail is a little bit too technical. I’ve got a degree in physics and a healthy interest in mathematics and astronomy, but even my eyes glazed over some of the more detailed descriptions of stellar collapse and the problems with changing directions at velocities approaching the speed of light.

For Reynolds, space isn’t something that’s pure, nice and clean. People dies horrible deaths, space ships rust and breakdown. Computers get viruses. This isn’t a sanitised Star Wars story, rather this almost feels real, or at least imaginable. Sometimes however, you feel that Reynolds is trying a little too hard to write space opera:

But by and large this novel is well worth the time and effort, though if you’ve read none of Reynolds earlier work, I would recommend starting with his earlier novels, or his collection of two short stories Diamond Dogs, Turquoise Days.