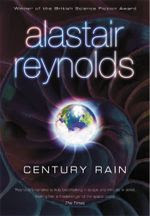 There is a narrow sub-genre of Science Fiction that I love - archaeologists in space I like to know it as - this is the type of Science Fiction novel that has historians looking at the remains of long vanished alien civilisations. Usually before they disturb some artifact and find themselves plunged into a wormhole etc etc etc.

Alastair Reynolds' Century Rain has a interesting variant on this theme. A few hundreds of years into the future mankind is divided between those who blame technology for the war that made Earth uninhabitable, and those that believe technology is a useful tool.

Earth is uninhabitable, but parts of it remain, and archaeologists like the protagonist Verity Auger, are experts at piecing together the last fragmentary remains of the doomed society. They hope to find more out about the last moments of Earth, in order to prevent a similar catastrophe in the future.

Now, elsewhere in the universe there exists an old, abandoned alien transport system. One of the portals to this contains, rather astonishingly an exact copy of the Earth in the mid-1950s. Even more astonishingly, the portal leads directly into Paris - the very city that our heroine Verity is an expert on! Of such coincidences the greatest Science Fiction is made, and Verity sets off to explore this copy of Earth (which turns out to have not experienced the Second World War, and the fascists are on the rise again!). Of course, it's not so simple. There is a murder and a classic, film noir detective to make the plot more and more convoluted.

Of course Ms. Auger rapidly finds herself in the midst of a plot to destroy the Earth (Mark 2) and all manner of people try and stop her. Including some truly nasty children.

Century Rain is not part of Reynold's normal SF universe. It is however a fun and interesting standalone novel. Well recommended if you like detectives, space and archaeology.
Posted by Resolute Reader at 3:00 pm

This reminds me of those old Star Trek episodes where the crew beam down to a planet that conveniently resembles 20th century Earth.

However, on the strength of your recommendation, I shall give it a go.

I just finished this book and i really enjoyed it. It feels like a lot of information was left unexplained but overall, i found it a good read.