John Rose - The Myths of Zionism 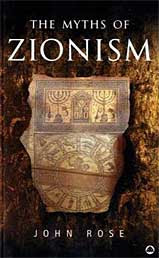 The most recent demonstration in London, against the ongoing occupation of Iraq once again showed that most of those who oppose the US and UK adventures in the Middle East also oppose the persecution of the Palestinian people by the Israeli State.

The huge anti-war demonstrations follow a tradition in this respect, because the great European anti-capitalist protests, in Prague and Genoa, closely followed by the European Social Forum events, also had numerous Palestinian flags, banners and badges.

John Rose’s book is a fantastic introduction to the arguments and historical basis for the existence of the Israeli state, and the consequent oppression of the Palestinians. Israel’s existence is down to the ideology of Zionism – the belief that there should be a Jewish state which would mean an end to the centuries of anti-Semitism and oppression that Jewish people have faced. The appalling genocide of the holocaust was for many, the final impetus for the creation of such a state.

Unfortunately, many of the assumptions and arguments in favour of Zionism are, as John Rose points out, based on half-truths and myths. The biggest lie, that Israel was a “Land without people, for a people without land”. This myth has been returned to, time and time again. Rose quotes, Israeli Prime Minister Peres in 1986,

”The land to which they came, while indeed the Holy Land was desolate and uninviting; a land that had been laid waste, thirsty for water, filled with swamps and malaria, lacking in natural resources. And in the land itself there lived another people; a people who neglected the land, but who lived on it. Indeed the return to Zion was accompanied by ceaseless violent clashes with the small Arab population”

While Peres at least acknowledges the existence of the Arab population, “small” is not the correct description of a people numbering at least 650,000. His description of their “neglect” of the land shows a level of racism towards a people who had successfully farmed and lived on the land for centuries.

The author is careful not to simply blame the Zionists for the current situation – he also points his finger at western imperialism and colonialism for its role. Notorious anti-Semites like Winston Churchill were quite happy to sponsor the aims of Zionism so that they could create a “Watch Dog” country, to support British (and later US) aims in the Middle East.

Rose’s book also looks at much historical and archaeological data to back his argument for a very different historical Israel, one far from the biblical myths that Zionism often uses to justify Israel’s existence. He documents how increasingly Israel archaeologists are finding it hard to “discover” the land they expect to find. But he also shows how historically, Jews and Arabs have lived together, often using the very differences of their religions to strengthen their mutual society.

Rose ends on an optimistic, if controversial point. His optimism, is that precisely because Jews and Arabs have lived together across the Middle East in the past (and the not to distant past) they could do so in the future. His controversy comes because he argues convincingly, that for this to happen Zionism as an ideology must be discredited and removed, just as apartheid was dismantled in South Africa.

If I can make one small criticism of this book, it’s simply to do with the design. Two things are very annoying – the references Rose cites are placed within the text, making reading difficult and the sub-chapter headings are often comical in their content, reading like stilted introductions to a GCSE essay.

But these are minor criticisms in a book that will no doubt be a source of impassioned debate and argument for many years.
Posted by Resolute Reader at 8:23 am