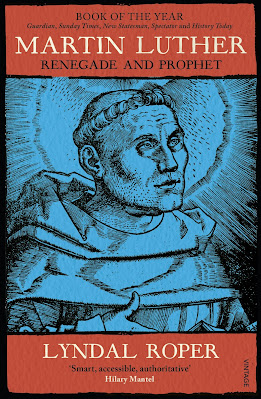 On October 31 1517 Martin Luther nailed a piece of paper to a church door in Wittenberg, Germany. The 95 statements on that piece of paper, we are told, kickstarted the Protestant Reformation. Or so we are told. Whether Luther actually nailed anything to the door, or whether that was a latter legend created by his followers to complete a carefully managed image we will likely never know. But the story works because it seems to be very much in character for Luther, a man whom we know a great deal about.
Lyndal Roper's biography is a detailed study of Luther's life and personal motivations. She explains that "the wealth of material that has survived on Luther is so great that we probably know more about his inner life than about that of any other sixteenth-century individual". This shouldn't be surprising. Luther was a devout man whose religious life was very much a personal experience. He found himself in contradiction to the established Church in part because of his personal experiences. So its no surprise that his own writings, recollections and those of contemporaries were filled with personal experiences. Luther's legacy however was also carefully managed - his biography written in part to continue to battles of the Reformation itself.
But Roper wants to go further than understanding Luther's inner turmoil. She wants to explain how his "theology sprang from his character", and she uses a psychoanalytic approach to do this. The first step in Luther's rebellion, argues Roper, was "rebellion against his father". Fatherhood was important to Luther, both in the religious sense whereby Luther "emphasised the whole gamut of the fatherly aspects of God's nature" to the material one where "Luther's notions of manhood and fathers were forged by the rough world of Mansfeld as well as his relationship with his father".
Roper places her stall out early. Luther's rebellion, she argues, arose very much out of a personal crisis, which Luther's father in a central role, but she also admits that this process is not clear:

It is difficult to know exactly what role the conflict with his father might have played in these struggles, but it does seem that his spiritual troubles stemmed from the relationship he was forging with a paternal God. All the crises cluster around the terror of being confronted directly with God, the Father, who is also God the judge, without any intermediary; whereas the whole purpose of the monastic life as Luther experienced it was to create a security net where the intercessions of Mary, prayers said on one's behalf and exercises to subdue the flesh all cushioned him against God' transcendent power. So if Luther's entry into the monastery was a retreat into a matriarchal world, that retreat was raising spiritual problems of its own.

What this long quote shows is the way that Roper sees Luther buffeted by experiences and striving to make sense of the world through his study of the world. But is it enough? There's no doubt that Luther had a complex relationship with his father, breaking with the families plan for him to become a lawyer in the service of their mining company, undergoing revelation and entering a monastery to the dismay of his parents. But as Roper herself notes, Luther was also "radicalised by the opposition he encountered" to the 95 theses.
Because whatever the process that pushed Luther on a particular road, the Reformation itself did not spring fully formed out of his head. Nor was it entirely the result of Luther's own thinking, actions or Biblical readings. Luther's ideas feel on receptive ground, soil that was already in turmoil as a result of wider economic and political changes. In fact Luther was surrounded by contradiction. His Reformation was a challenge to the established order, but it was also shaped by Luther's personal politics that saw rigid hierarchy on Earth as natural itself. Writing of Luther in Wittenberg, Roper says:

Luther would have been familiar with this arrangement, for it was what he had grown up with in Mansfeld. He naturally expected power to descend from above, not legitimacy to be conferred from below. This helps explain why his Reformation would be so different from that which would emerge in the south, and why his theology of power appears so reactionary. He simply had no experience of the more democratic values of southern German communes... As conservative as Luther's politics might have been, they were also in tune with the newly emerging political realities of the time; for it was the large territories of the princes that became the mainstays of the Reformation, while the civic communes of southern Germany were entering the twilight of their power.

So Roper understands that whatever the motivation of Luther the Reformation, as a process, took place on much wider political and economic ground. To be fair to Roper, she makes it clear she is not writing a history of the German Reformation, but a biography of Luther. But the two, in many ways, are inseparable and understanding Luther helps to understand the Reformation, as well as vice-versa. That said, Luther's personal character shapes specific events during the Reformation which have far reaching implications. Roper makes the point that when Luther was confronted with the authorities he "would in the end always align himself with the authorities". Luther was not revolutionary in a political sense. In fact he was deeply conservative in this regard. This can be mostly clear seen in Luther's reaction to the 1524/5 Peasant War, an uprising during the Reformation that saw thousands of peasants challenge the princes and the regional hierarchy over a number of demands relating to property, communal ownership and wealth. Luther violently opposed the peasants, despite having set in motion some of the processes that inspired them. His sermons against the peasants were violent and he urged a swift response. Despite his condemnation of the authorities at times, there is almost a shock in how Luther responds to the rebellion. Roper writes:

Yet there was nothing surprising in his stand. It was already prefigured in his conflict with Karlstaft [a figure of the radical Reformation] from the moment that Luther decided to defeat the Wittenberg movement and support the Elector's attempt to make peace with the Diet by slowing the pace of evangelical reform. Luther had already rejected the communal Reformation, powered by popular pressure, which inspired Karlstaft. This was the Reformation that was also popular among the lower townsfolk in Allstedt, Muhlhausen and Frankenhausen, where [revolutionary] Müntzer had his most loyal and zealous supporters.

So rather than seeing the Peasant War as a continuation of his belief, or even his beliefs taken too far, too fast, Luther saw the Peasant rising as being the "triumph of the Devil" [Roper's words].
Roper shows how these events pushed Luther down a particular road. Partly personal - he responded by getting married, in direct defiance of the Church, an act of rebellion and an "affirmation of his 'courage and joy'," according to Roper. But they also shaped Luther's own Reformation in a way that meant not upsetting the political applecart too much. After 1525 it seems to me that Luther is much more conservative, more willing to compromise and keen to ingratiate himself with powerful forces that can help him push his agenda while not frightening established wealth and power. The brave Luther of the first half of the book is replaced by a more conservative figure in the second.
But problems with Luther's belief don't just stem from his conservatism. He was also a virulent antisemite, and Roper powerfully attacks this aspect of Luther's beliefs. His antisemitism:

was not a medieval relive but a development of it. Even more disturbingly, it was not incidental to his theology, a lamentable prejudice taken over from contemporary attitudes. Rather, it was integral to his though; his insistence that the true Christians - that is, the evangelicals - had become the chosen people and had displaced the Jews would become fundamental to Protest identify. It was the central plank of his understanding of the Lutherans' providential role in history, and to secure it the Jews had to be pushed aside, discredited and, if necessary, eliminated.

I began Lyndal Roper's biography prepared to be frustrated by her insistence one psychoanalysing Luther's life. I finished it however extremely impressed. The Martin Luther she describes is a complicated figure buffeted by circumstance and inner conflict, brave enough to stand out against the established Church, but unwilling to go too far for fear of revolutionary change. Because this is a biography of Luther I was unsatisfied by Roper's explanation of the Reformation itself. Constantly I wanted to understand what motivated people to follow Luther, what was it about their circumstances that made Luther's radical critique so invited to so many people. Indeed why were some prepared to take the Reformation into their own hands and risk to their own lives. Here I think we need a more detailed look at what was changing in European society, and in particularly in Germany. Roper doesn't offer that because she remains focused on her main subject - but read together with other histories of the period her book is a brilliant account of Martin Luther's life.
To this praise should be added a brief note that Roper's book is lavishly, indeed beautifully, illustrated and her command of the source material, her insights into Luther and his contemporary and her commentary of material such as the use of Luther's image is fascinating. There is much her for readers even if one doesn't agree entirely with her approach.
Related Reviews
MacCulloch - Reformation: Europe's House Divided 1490-1700
Tawney - Religion and the Rise of Capitalism
Posted by Resolute Reader at 4:13 pm