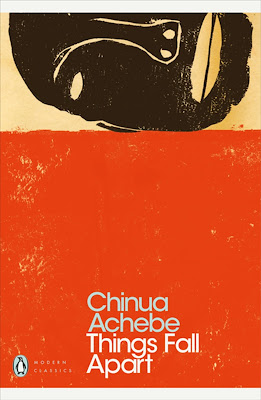 In many ways Chinua Achebe's Things Fall Apart is one of the most insightful novels about colonialism in Africa I've ever read. It's subtly lies in the seemingly innocuous way the process takes place - a thriving African community is brilliantly described mainly from the point of view of Okonkwo, a great warrior and wrestler, whose renown and wealth is undone by the accidently killing of a clansman. His punishment, banishment for seven years, means that he learns of the undoing of the village from afar.

In his absence white missionaries arrive, tempting some of the villagers away from their traditional practises and beliefs, alongside this the serpent voices of the missionaries are further undone by the trading post, that offers new wealth by tying the community into wider capitalist networks. The "lunatic religion" is reinforced by money "flowing into Umuofia" and with this money comes a growing feeling that there might be "method in the overwhelming madness".

But behind the money there's a new white government and with that state comes violence. Government and justice are removed from the hands of the village elders and placed in the hands of people who know nothing of events, an abstract law replacing the complex rules that manage behaviour. When they protest the community and its village elders are collectively punished.

Returning to this transformed world, which has seen his personal hopes and dreams destroyed, and the old order "fall apart", Okonkwo is at first disappointed that his was not the long imagined triumphant return, but this is soon replaced by anger and humiliation at what has happened to his people. His response, in many ways, is a personal redemption even if it is a hopeless gesture against the colonial powers who literarily treat it as a footnote of history.

Achebe's book is not one of violent resistance or retribution, it tells the story of how colonialism was a destructive force - both explicitly through guns and soldiers, and usurped state power, but also through the networks of commerce and religion that shattered the old order in the name of "progress".

Things Fall Apart is not a cheerful novel, nor is it patronising to the pre-colonial communities. These are portrayed as very different to European "society", but with their own internal logic, rationalities, rules and contradictions. This is not a pre-colonial utopia, but nor is it a society that sees systematic oppression and exploitation - that took the arrival of capitalism. This is one of the great novels that explores that transformation.

Posted by Resolute Reader at 10:59 am