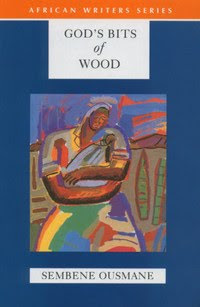 There are many reasons why socialists support strikes. The most obvious of them is that they are the best way that workers can use their power to win changes and improvements to their lives.

But there is a more important reason. Anyone engaging in collective action changes themselves. The old ways no longer seem right. Attitudes and beliefs are shaken, changed and sometimes discarded. The belief in your own class and its ability to organise is strengthened. In the biggest strikes, the very fabric of society is threatened. As Marx put it, in a slightly different context, "All that is solid, melts into air".

It is because he understands this aspect of the struggle that Sembène Ousmane's great novel is so powerful and engaging. Centering on the great strike of the workers on the Dakar-Niger railway in the late 1940s, Ousmane describes the way in which the workers are driven to strike and how they change.

The strike is marked by bloodshed as the authorities resort to brutal force on the very first day. The workers seem to expect it, this is after all, colonial Africa and the European powers' rule has always been marked by violence. Ousmane doesn't dwell on the racism and horrors though - he was writing for an African readership after all. But he concentrates on the way the strikes and their families are.

So the strike is marked by rumour and gossip. As the days become weeks, families have sold everything they have and food and water is in short supply. But suffering is collective. Those who don't strike aren't simply ignored, they are almost incomprehensible to those fighting for their livelihoods.

At the heart of the story is the way that the role of women changes. From being second class citizens they become at first the breadwinners - trying to find ways to feed the family, to powerful fighters on their own. These changes bring their own problems. Turning your world upside down like this doesn't please everyone. Not least the religious leaders who argue that the strike, being the work of communists, must be ended.

But its the women who take centre stage. Whose own action sets the scene for the final confrontation of the story. At the novel's end, the women are changed forever, and they know it. But so are the men, and so is the community. One of the strikes leaders argues that this is a class war. A battle between exploiter and exploited. One where skin colour is only important because the whites are the ruling class. Workers everywhere have shown solidarity, even from France, to the strikers' surprise.

The collective understanding and developing identity is important. Senegal was starting down the road to independence as the events described are happening. This development of an identify forged in struggle is important for Ousmane, writing as he was on the eve of independence. Few books come close to showing what a strike is like for those taking part. Even fewer come close to allowing us to sense the real power of working men and women.
Posted by Resolute Reader at 4:36 pm