Stephen King - The Wind Through the Keyhole 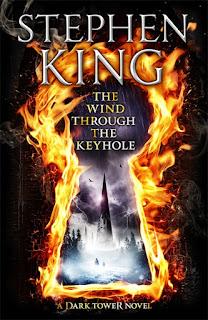 Long term readers of this my reviews will know that I have a great love for much of Stephen King's work and particularly his Dark Tower books. Nearly four years after finishing that epic series I was finally able to return to them by reading The Wind Through the Keyhole a novel set between volumes four and five of the original series. The novel adds little to the actual series, but adds a great deal to the backstory of the Gunslinger and his companions. It also builds on the wider history of the world they inhabit.

Sheltering from a stark-blast, an enormously powerful storm that drops temperatures to freezing and shatters wood with high-speed winds, the Gunslinger is reminded of a story his mother used to tell him. As his companions huddle around a fire, he tells them the story of how he first retold that tale, and thus we are treated to a story within a story. The Gunslinger tells us of his adventures that took place after those described in the forth volume Wizard and Glass. They deal with a mission he is sent on to kill a skin-man, a shape-shifting creature that has been massacring the population of a small mining village near to Roland's home.

During an over-night shelter there, Roland tells tells a nervous witness to a massacre the story that his mother had told him, of a small boys adventure that leads him to become a Gunslinger. Readers hoping to find answers to the great mysteries of the other novels will be disappointed. The book contains little of that, though it does tie up some loose ends and certainly gave this reader a sense of a deeper knowledge of Roland's world and his motivation. Telling more would ruin much for future readers, so I'll leave it there, except to recommend the Dark Tower series once again to those who haven't read them.

King - The Gunslinger
King - The Drawing of the Three
King - Wizard and Glass
King - The Wastelands
King - Wolves of the Calla
Posted by Resolute Reader at 7:45 pm