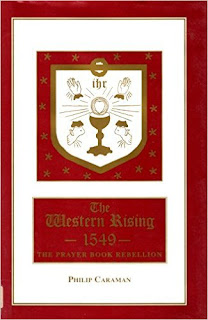 1549 was a difficult year for the English ruling class. War with France and Scotland was on the cards and rural discontent was spreading the length and breadth of the country. In two regions, this discontent exploded into insurrections. In Norfolk the rebellion became known as Kett's rebellion after the local gentleman who assumed leadership. In the south-west, in Cornwall and Devon the rebellion became known as the Prayer book, or Western Uprising.

Philip Caraman's The Western Rising is a decent introductory history to the events in the south-west. His central argument is that this was a religious uprising which almost completely lacked any wider political or social demands, agrarian discontent was "scarcely a factor" in 1549 he writes. In this he echoes the only real contemporary chronicler, John Hooker, a Protestant historian who was based in Exeter during the siege of the city during the uprising. Hooker wrote that the rebellion was "only concerning religion which then by Act of Parliament was reformed". It is true that of the demands put forward by the western rebels on two occasions, religious questions dominated. The rebel demands cover every aspect of religious life, as Caraman explains


They asked that curates should not be restricted to administering baptism only on Sundays and feast days as the public laid down... Mass should be celebrated with only the priest communicating; the sacrament should be reserved in churches; holy bread and water was to be distributed at the church door; Mass was to be in Latin, for the Cornishmen did not understand English, and it was to be said or sung in the choir and not set forth in front of the People 'like a Christmas play'.

These, and other demands, are centred on changes being imposed by the English government. These concerned the Protestant attempts to further do away with Catholic religious practises. The changes, argues Caraman, were so significant that they forced the population "from all strata in society" into open rebellion.

Caraman is absolutely right to argue that the changes, particularly the introduction of the new prayer book by Archbishop Cranmer were significant and provoked enormous anger. Particularly important was the question of language. Many people in Cornwall did not speak English and preferred the Latin liturgy. They also saw the pomp of the traditional services as an essential part of their lives. Further, Caraman argues that the precise nature of the services meant people's relationship with their past and their ancestors was destroyed.

Until the Chantries Act of 1547 it was common for people to make donations or endowments in order for priests to say prayers or mass for the souls of the departed. By removing this right, it was no longer possible to actively try and reduce time spent in purgatory for a deceased loved one. Caraman quotes a modern historian, A.G. Dickens,


if a man really believed  that the ministration of a chantry priest shortened the bitter years of Purgatory for himself and his dearest departed relatives, then the Dissolution gave him great spiritual offence and became a matter for his passionate concern.

There were further impacts such as in one example given by Caraman were a village lost the endowments that had supplied water, cared for the sick and supported the clergy in the church. These sort of changes, together with the removal of traditional religious services and the introduction of new books and many new rules caused enormous anger.

The point I make here, and is missed by Caraman, is that the religious grievances of the population were not just religious. They were inherently social, and simply because there was no need for the population to rise against enclosures or taxes, doesn't mean that people didn't feel like their whole lives were under assault. This helps to explain the scale of the Western Rising which at times involved tens of thousands in well-armed and well-organised rebellion.

The rebellion was short lived. Despite initial successes in capturing St Michael Mount and Plymouth, the rebels became bogged down in a siege of Exeter, rather than marching on London. Had they done so, the government was so stretched dealing with multiple risings, that they may well have been able to capture London. Certainly the government thought so, and feared the rebels might put Catholic Mary on the throne instead of the boy Edward VI.

The rebels didn't. Instead their siege of Exeter lasted weeks and the government was able to mobilise forces (though only by using mercenaries for the first time against their own people) to brutally suppress the uprising.

Thousands were killed, many more were barbarically executed. Those responsible for the suppression seeming to take delight in their brutality. Because martial law had been declared no trials took place to leave us records of what the rebels might have said in their defence.

Caraman's book is a excellent introduction to the Western Uprising. But because it separates it completely from the other revolts I think it weakens the analysis of the causes of the rebellion by over-emphasising the question of "religion". Nonetheless this is a good starting place for a study of 1549.
Posted by Resolute Reader at 8:26 pm

I haven't read the book but i agree with your points about not viewing it too narrowly in religious terms. Firstly the weakened political legitimacy of a boy king controlled by Seymour, a resented Lord Protector, was one factor in how the rebels justified their resistance. But from the perspective of class struggle it's also noticeable how the rebels' demands did not use the customary 'we pray your Grace' or similar, but the very blunt ' We will have'. And the 13th demand was that gentleman should not have more than one servant - pretty revolutionary at the time!

Yes, these are good points, particularly the demand regarding servants. That religious ideas can be both religious and social/political ones is not an understanding shared widely, but I think it's crucial to how we understand events in this era. It's a point made very well in this article on revolutionary movements in the Middle Ages http://isj.org.uk/religion-and-revolution-in-the-middle-ages/