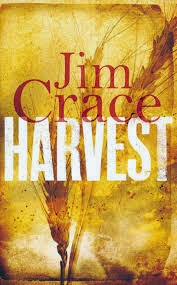 The enclosures that took place in England were part of a process of the development of productive forces in the countryside. In medieval times, they were often about local lords consolidating wealth. From the English Civil War onward, the destruction of common land and its associated rights, and the enclosure of farmland was explicitly about constructing capitalistic economic relationships in the countryside.

But writing something like the above paragraph hides so much. It ignores the violence used against those who formerly worked the land. It does not include the displacement of families, or the way that former labourers were pushed into new jobs in dirty, dangerous factories. It misses out the pain and anguish of turning land from grain to sheep.

Jim Crace's brilliant novel Harvest does. Telescoping the changes that take place in a small, remote English farm into a short week, Crace captures the transformation that enclosure imposed upon the poorest in England.

One morning, at the end of harvest, the village awakes to fire. The signal fire set by new arrivals in the area, and a fire in the Master's dove cote. The impact of both these events forms a backdrop to the wider changes, initially represented by Mr. Quill who is engaged in drawing maps of the village. The villagers cannot comprehend the way the land is transformed into coloured boxes on a piece of paper.

Few can understand the radical transformation that is about to take place. The kindly local Master wants none of it, but it turns out that he is not the real owner. By dint of the laws of inheritance his brother in law arrives, desperate to transform the village's economic outlook. Some families will be turned into shepherds, but for the others - he'll build a church to preach charity. The outlook of this proto-capitalist is epitomized by his disbelief that the Master won't turn a beloved horse that has died into grease. Any opportunity for profit seems to be his mantra.

Jim Crace's village is timeless. But it is no pre-capitalist Utopia. The villagers struggle hard in the fields, finding relief in alcohol and sex. They dream of stopping work, but love and know their lands better than anyone else. They fear illness and injury and are sharply aware that even a small cut can prevent them contributing to the collective labour. While suffering is well known here, violence isn't, which makes the shock of the new even harder to deal with.

Brilliantly written, in clear, sharp prose, this is a wonderful novel of life in a changing countryside. It feels like a small glimpse into what happened in a thousand different villages, in a hundred different areas of the British Isles. The appalling reality of "primitive accumulation" brought to life.
Posted by Resolute Reader at 4:22 pm

Nice review. I'm really looking forward to this one, having read his Quarantine. It's good to see the political aspects brought out more clearly.