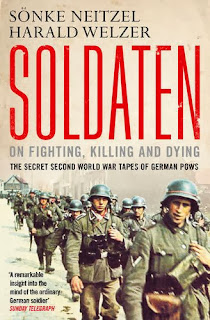 The discovery of forgotten transcripts of the conversations of German POW's in the Second World War, is a remarkable opportunity for scholars of the period to try and better understand the motives and ideas of Germany's combat troops. This accessible book gives the reader an insight into much of the material, from ordinary soldiers to Generals, Sailors and Aircrew, to members of the SS. It also enables the authors to discuss some of the age old questions concerning the Nazi regime. To what extent did the Germany Army know about the Holocaust? Why did they fight on and on, when defeat was inevitable? To what extent were ordinary soldiers committed Nazis?

While understanding that the authors have had to pick and choose from among vast quantities of data, often to illustrate a specific point, readers will still be shocked by much of the contents of the conversations. Allied forces didn't transcribe everything the POWs said, concentrating on material that would have helped the war aims, or possibly be used in post-war war crimes trials. So among all the debates on military strategy, or the oneupmanship by soldiers discussing their personal role, we find that knowledge of war crimes among the Wehrmacht was remarkably common. Partly this was based on personal experience. One solider, identified  describes an event he witnessed in Poland.

"I wanted to take some photographs... and I knew an SS-leader there quite well and I was talking to him about this and that when he said 'Would you like to photograph a shooting?' I said, 'No the very idea is repugnant to me', 'Well I mean, it makes no different to us, they are always shot in the morning, but if you like we still have some and we can shoot them in the afternoon sometime.'"

"Regardless of whether individual soldiers found those acts right or wrong or simply surreal, the Holocaust was not a central part of their world in the way it has been ascribed to them.... Knowledge that mass murders were taking place was widespread. It could hardly have been otherwise. But what did that knowledge have to do with the world of war the soldiers were charged with?"

There is some truth in this. From the transcripts it is clear that soldiers often saw the mass killings as something that involved others, and as the quote above suggests, found it morally repugnant, it was something that was linked to the war they were part of. However I think it is wrong to conclude as the authors do, that this makes the actions of German troops in World War Two identical to other soldiers "just doing their job" in other conflicts. True there are similarities. One description of the destruction of an entire Russian village in order to kill some partisans, with the use of grenades to burn homes down, reads eerily like depictions of US troops actions in Vietnam.

The particularly extreme violence of the Eastern Front, with its backdrop of racist ideology, the struggle for "living space" and eight years of Nazi rule back home created an atmosphere were mass murder, violence and the murder of prisoners could become common place. There are of course similarities to massacres and executions in other conflicts, as well as by other forces (Allied included) in the Second World War. But it is noticeable, for instance, that in Vietnam, the conflict that the authors draw most parallels, large numbers of American GIs refused to fight, and engaged in open rebellion. That was not a feature of German forces in World War Two.

There is much in here for those trying to understand World War Two. Much of it is difficult. The chapter on sexual violence and mass rape, and the attitudes of some soldiers to female Jews is particularly difficult. As are the accounts of the murder of civilians. Not all of these can be blamed simply on the dehumanising, brutalising reality of war. Its noticeable, for instance, that one airman who celebrates the bombing and machine gunning of refugees is describing his actions on day three of the conflict.

While finding the book fascinating, I was not always convinced by the over-view offered by the authors, but I do recommend the book for those trying to understand both World War Two and the particular nature of Fascism.

Kershaw - The End
Posted by Resolute Reader at 10:36 pm