Jordan Lancaster - In the Shadow of Vesuvius: A Cultural History of Naples 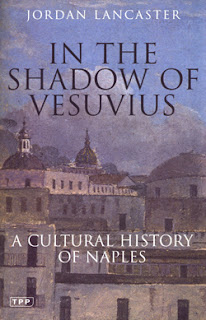 Before a recent visit to Naples I was repeatedly warned to beware of crime and pickpockets. Online reviews of our hotel complained about the dirt, graffiti and noise from the city centres population. Certainly modern Naples has a reputation as somewhere to be avoided, or travelled through on the way to the Amalfi coast, or the tourist hotspots at Pompeii.

I disagree with this judgement. Naples is in many ways no worse or better than any other city of a million souls. It is poor, and that creates social problems. But this is the result of government policy, organised crime and bureaucratic indifference. But Naples hasn't always been seen in a dark and gloomy light. For much of the last few hundred years it was the destination of choice for the up and coming nobility. One guide to Naples, written towards the end of the sixteenth century described its wonders:

"The number of marvellous things in this city and kingdom of Naples is so vast... Naples has always been as well attended by the agreeableness of its site, as by the studies and fine arts that flourished in it... In Naples one sees a flourishing and brilliant nobility... It has its population, numerous and civilised of choice people, who live the equal to any noblity in splendour. .... Its wide and spacious streets are adorned by the most noble and magnificent palaces and temples, with fountains of the clearest and freshest water, which bring great ornament and dignity to the city."

By the mid seventeenth century, Naples was a highlight of the grand tour, though in Jordan Lancaster's fine account of the city's history she points out that this was as much to do with the easily available prostitutes than just the  cultural, artistic and scientific sights in the city. The reawakening of Vesuvius in 1631 spurred scientific discussion about the volcano and related subjects. Just as the discoveries of Pompeii and Herculaneum would lead to renewed historical interests.

The story of Naples is very much the story of Italy. From ancient times the city has been associated with important trading routes, following the fall of the Roman Empire, in turn the area was dominated by various groupings (including I was surprised to learn a population of Normans from France). A long period of Spanish rule included many golden years for the people of the city. Later the Italian city states developed and Lancaster describes the alliances, wars and rows with ease for the reader who knows little of the subject. Famously, Naples was very closely associated with the unification movement of Garibaldi whose arrival in the city was supposed to herald a new era of prosperity. Yet promises were quickly forgotten.

But despite the splendour of Naples' palaces and fountains, the city was always one of sharp divisions. The extravagance of the wealthy compared to the immense poverty of the inner cities. Lancaster tells the stories of various attempts to deal with the shoddy housing, unemployment and hunger over the centuries, but the problem refuses to vanish. Despite occasionally well intentioned rulers the real underlying problems have never been solved.

Lancaster's book doesn't avoid the difficult questions of poverty and class. But her book is very much a cultural history. It concentrates on that side of the city's history rather than the class struggles or wider issues that shaped Italian history. There is much here on literature, art and music though the author certainly understands the way that cultural Naples has been shaped by the wider economic and political issues. It is a short book, but the author packs an enormous amount into her book. It is an excellent introduction to the city and should be read by everyone heading to that part of the world. It certainly illuminates a city that has far more to it than a port leading to Capri, or the nearby Roman ruins.

Beard - Pompeii
Grant - Cities of Vesuvius - Pomepii and Herculaneum
Newby - Love and War in the Apennines
Posted by Resolute Reader at 3:19 pm