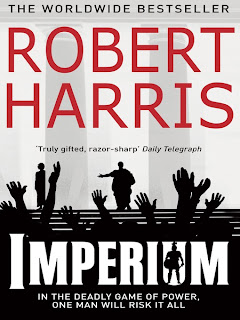 Novels set in Ancient Rome are always hampered by the perceptions that people have of life there 2000 years ago. For many years Roman history has suffered from being the history of great men. Of senators, generals and of course Emperors. That's not to say that novels based around such individuals cannot be entertaining and informative.

Nonetheless because the history (and the documents) we have of the period tend to be those of “great” individuals, novels tend to follow similar paths, if only because the material available to form the backdrop for such lives is more readily accessible.

Robert Harris has now written a number of novels set in the ancient past. I wasn't overly impressed with the first of these Pompeii. But Imperium is a much stronger novel. Even though it centres on some of the most important figures of the late Republic, Harris avoids the trap of forgetting about the majority of the population because his narrator is Tiro, the extremely talented slave of the famous lawyer and counsel, Marcus Cicero.

Harris has done his research well. Many of the events in this book (which is in effect two linked shorter stories) are based in reality. The novel itself is supposed to be a biography of Cicero, and such a book (at least according to Plutarch) did exist, though tragically it has been lost to us since. Cicero is portrayed not simply as a brilliant orator. He also holds a mind of tactical genius and a singular determination to reach the peaks of power that were offered during Republican Rome.

Thus while centring on a particularly dramatic legal case (of extreme corruption and abuse of power by a Roman governor) and a political intrigue several years later, the main thread of the story is Cicero's struggle to achieve recognised greatness, seen through the eyes of his most important slave.

The backdrop to this is the decline of Republican Rome and the beginnings of the rise of the era of the Emperors. But behind all of this are the interests and struggles of Rome's different classes. The ruling class are aloof from the majority of the population, though a middling layer (of whom Cicero is a New Man) form a link between the top of the system and the masses below. Cicero's clients include those from the lower levels of society who often have been failed by the system as well as those who are more wealthy but seek redress. The masses by and large are a stage army, who give their loyalty to those politicians who have managed to either offer them the most in the way of bread and circuses or improved their lot. In Harris' telling Cicero is a man of the people, struggling against the excesses of the aristocracy and hence beloved by many ordinary people.

While Harris captures the limitations of Rome's democracy and brilliantly portrays the excesses and corruption of the majority of the ruling class, his portrayal of the dynamics of the mass of the population seems rather more one dimensional. This is very much exposed in the references to Grachuss, the reforming politician who was murdered by the ruling class for attempting to redistribute land in the interest of the masses. It is in these short paragraphs where you get a feel for how mass, class interests could shape Roman politics in a way that is absent elsewhere in the story.

Ultimately though this is the tale of a few individuals, despite Rome being the backdrop. Harris gives the reader a plausible tale of what life was like, the sights, smells, over-crowding and problems in the ancient capital. The dreams of freedom of Tiro are poignant and seem real, and if on occasion there are plot devices that seem a little contrived to ensure that our narrator can be present at some of the most important events in Roman history, this can be excused in the interest of a great storyline.

Unfortunately the afterword tells us nothing of what is based on known history and what is speculation and Robert Harris despite acknowledging his reliance on more recent scholarship he fails to direct the reader to more works that might allow those whose interest has been pricked in the history, to learn more. This is a shame because Imperium is an excellent read and could well put many on the path to a deeper study of Roman history.

I thought this was in many ways an allegorical novel about Tony Blair - a lawyer who enters politics for sound reasons, but who has to make so many accommodations in order to gain power that by the time he gains it he no longer remembers why he wanted it.