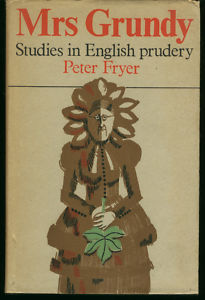 Such anecdotes make us smile today, though even in these enlightened times self censorship, or prudery pervades many public bodies. We might like to think of ourselves as better than the Romans or the Victorians, but despite the changes we have seen, much remains the same.

Fryer's book is mostly an account, if a structureless one, of changing attitudes. He begins with language, early chapters trace the changing words, the way that the word belly (first used in 1340) became replaced gradually by stomach (1375). "Respectable Englishwomen" he tells us, were shocked by European doctors who used the word belly in the 1900s. Embarrassment about ones own body seems a particular affliction of the English speaking lands. The idea that one could be shocked by the use of the word belly seems strange, but far less strange than those Americans who could not bear to describe individual legs,  as it drew attention to the shape of their bodes. Fryer includes stories of Doctors unable to treat patients who couldn't tell him which "limb" was hurting. Animals and inanimate objects suffered too, the "leg of a chicken became second wing in Britain, second joint or trotter, or the dark meat in the USA".

Fryer's history continues. On occasion it becomes mere lists of words, the succession of synonyms that came into favour, and then were considered offensive, reading like a line rude schoolboy poetry;

But there is much more than this to Fryer's history. The chapters on dancing and Sunday's in particular demonstrate the battle that took place between some in society (almost always those at the top) who wanted to restrict the behaviour of the masses. Even in Medieval times, the establishment was forbidding drinking and dancing on Sunday's though, in the case of Richard II this was more to encourage archery practise. By the time of the reformation and later, attacks on such behaviour was an attempt to regulate people into worship on their sole day off.

Its at this time that attempts to police behaviour increasingly come to the fore. Networks of informers and gossipers, spying on those who danced, made love, sang or had a glass of beer on Gods Day, led to more than one person being put in the stocks, imprisoned or ostracised.

The most entertaining chapter is that which deals with attempts to reduce drinking. Drink, the curse of the devil, was supposed to destroy morals and set people onto a road of wickedness. Fryer tells use the stories of debaters and pamphleteers who set up stall against the brewers and publicans. Of huge campaigning organisations that tried to force pubs to close on Sundays and educate the masses about the dangers of drink. Many of these books and stories raise a wry smile:

"Another curiosity of teetotal prose, standing out even in a genre where eccentricity of presentation is never unexpected, is 'Tippling and Temperance' (1890) by Charles Bateman. Everyone of its 1289 words begins with the letter t, and 'this terse treatise... trenchantly traverses tattling, time-serving table-talkers; temerarious tolerance to the trivial, trifling, truckling toss-pot"

Sadly, this is really all there is too the book. In Fryer's introduction he declares what he won't do:

"different classes tend to have different standards of sexual morality; it would be an arduous undertaking to study the changing class attitudes to sex in this country over the last four hundred years..."


Which is disappointing, because such a study would have been of great interest, and Fryer, the man who wrote the monumental "Staying Power" a history of Black people in Britain, would surely have been capable of such a work. So despite Fryer's 1960s warning that there is "no reason Mrs Grundy is incapable of returning to a position of influence", his book lacks any attempt to understand the root causes of changing social attitudes. There is nothing here, for instance, which tries to explain why, in the 19th century, male doctors suddenly were expected to assist at childbirth without a woman removing her voluminous dresses. Why were medical men no longer able look at a woman's naked body? What had changed in attitudes to women, and why? Sadly, the lack of such social context, turn this history into little more than an entertaining smirk at the prudes of the past. Without offering any analysis of why things were like Fryer describes. Given Fryer's Marxism and other radical writings, this is a surprising ommision.

Fryer - Hungarian Tragedy
Posted by Resolute Reader at 10:42 am