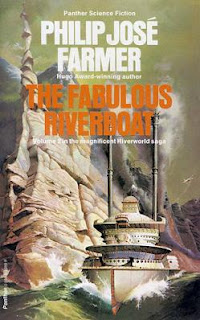 I've previously reviewed the first novel of Philip José Farmer's series set on the fantastic Riverworld, so I won't repeat my descriptions of that amazing planet. Volume two of the series is more action packed and less thoughtful than the first book, but that does not undermine the essential brilliance of the novels. Here we have the most impossible planet, made to feel possible.

This volume only mentions Richard Burton, the hero of the first book in passing. Burton now has reached almost mystical proportions amongst the denziens of Riverworld. A few characters return, Goering, as a rather annoying religious character for instance.

This plot centres on the desires of Mark Twain, or Sam Clemens to use his given name. Sam wants to build the eponymous riverboat, to explore and find the true meaning of Riverworld. To do so, he needs a source of metal and other materials that barely exist on the planet. The intervention of a rogue member of the planet's alien masters allows this material to be found, and the kingdoms that develop around the locations of these new resources creates the potential both for technological advances and conflict. An era of Imperialism has arrived to Riverworld. Interestingly, slavery (in the form of grail slaves) has re-made an appearance. On a planet were no-one has to work, because food is provided through the grails that each person has on reincarnation, getting others to labour or fight for you, can be difficult. Taking their grails away makes slavery possible. It also makes slave revolts a possibility too.

The uneasy alliances between such historically untrustworthy characters as Eric the Bloodaxe and King John are of course bound to be full of tension. To tell more would ruin the story, but Farmer skillfully keeps us believing its all possible and throws in a few sharp commentaries on the way the world runs today.

Posted by Resolute Reader at 7:16 pm