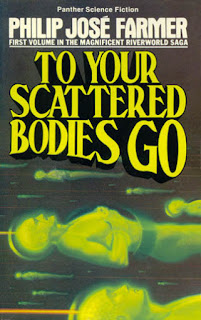 First published in 1971, this novel must rapidly have become a classic of the Science Fiction genre. Despite some rather clunky dialogue in places, the author has created a strange, fantastical world that allows him to explore a multitude of ideas and experiences. It's also believable, which give the world's nature might sound strange, but the characters and places work well and hang together.

So what is this world? There isn't really a way of telling from the story itself. It is a planet that is encircled from top to bottom by a river, along the banks of which every human being that has ever lived is regenerated simultaneously at some unknown point in the future. Naked with only a small pot that allows them to create food from mysterious artifacts, the humans find themselves reincarnated with a variety of people from different eras. Our hero, the famous writer, explorer and adverntuer, Richard Burton is reincarnated with a rather prim woman from the 19th Century, a Neanderthal, a collector (and Burton obsessive) and an alien who in Burton's future has destroyed most of humanity. Their travels mean they meet people from every era of human existence, all united in their arrival on a world with limited resources.

The story of exploration has been detailed elsewhere - though I'd recommend exploring the book. More interestingly for the purposes of this review is the way that Farmer explores topics such as anti-semitism. Richard Burton's alleged anti-semitic writings are mentioned, though Burton is angered to be described like this. But anti-semitism in the era that comes after the Nazi holocaust evokes a stronger response than it might have done in the past.

When people die on this new planet, they are again reincarnated, naked and whole in a random location. Burton discovers then that you can explore this world by suicide. But are you the same person if you do this, everytime you awake. Your memories indicate your are, but you clearer are different physically. Burton meets and travels with the Nazi Goering, from Burton's own future. Goering himself dies multiple times, often, and rather gratifyingly at the hands of people who understand his historical role. But Goering changes. Never seeming to give up on his past, he at least recognises that he is destroyed and repents of sorts.

So we have a planetary setup that allows the author to explore multiple ideas - add in the obiligitary 1970s sex and drugs and the stage is set for some interesting tales and explorations.

There are some annoying bits. The writing can, as I said, clunk. The author places himself into the novel as a collector and potential biographer of Burton. Their reincarnated proxmity may be coincidence, though it makes the novel work. Yet the author has such an autobiographical knowledge of Burton and other contemporaries (reminding them in places as what they did on such-and-such a day, or where they trained or married) that you can't help but feel jared by such obvious plot devices.

Nevertheless, this is fun and different. I'll hunt down the sequels.
Posted by Resolute Reader at 1:55 pm