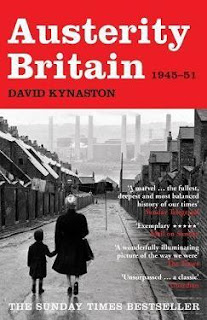 As the Tories and their lickspittle friends the Liberal Democrats try to destroy every last vestige of the welfare state, what better book to read than an account of Britain's greyest hour - the post war years. Austerity Britain is well titled. The sufferings of the war-years, the rationing, the death and destruction rapidly passed into a period of dull greyness. People continued to go hungry, if anything rationing got worse as the food aid that had poured into the country from the United States no longer arrived. The destruction wrought by bombing, added to the over-crowded conditions in many working class areas from before the war, meant that housing was in short supply.

David Kynaston's history of this period is a superb follow up to a book I read and reviewed here recently - Angus Calder's history of World War Two - A People's War. Like Calder, Kynaston uses extensive social records from the time, Mass Observation in particular, but also diaries, reminiscences and interviews. Many of these are from ordinary people, though Kynaston is at pains to try and include all sides of the class divide. This is important - class differences a very stark during these years.

The book starts with the most hopeful period - the introduction of the welfare state and the nationalisation of industry. Around a fifth of the economy was nationalised - including the coal industry, energy, the Bank of England and the railways. Kynaston argues that this nationalisation was at the heart of the post-war Labour government's agenda, and as a consequence was viewed with terror by the establishment and the Tories. As the election results came in, many middle and upper class people thought their time had come. They imagined their wealth being taken from them, losing their money, businesses and homes. In fact this didn't happen. Labour proceeded nervously, seemingly unsure of how to use their popular mandate, terrified of upsetting big business.

As unemployment rose, cynicism seems to abound. Kynaston paints a picture of a population unhappy and grumbling, unhappy with their lot, but unconfident to challenge the system. There must be some truth in this - strike figures don't exactly show a combative working class, but you do see the settings for future conflicts beginning to be laid out.

One review of the book, in Socialist Review, argues that there is not much to this, than a series of anecdotes. There is much truth in this, and I agree with that reviewer that the anecdotes are illuminating. Too often they seem random, but they are given context and the astute reader can develop a better understanding of the time. There are startling omissions - the rest of the world most importantly. The ending of the War, marked the beginning of the end of Britain's Empire, yet some of these great events, which surely must have impacted upon people's consciousness barely get a mention. I do not recall a single mention of Indian Independence in 1947 for instance.

The book is at its best when it gives a flavour of life and the times. The sections on the lives of recent immigrants to the country from the West Indies for instance, are fascinating. The chapters dealing with the reaction of the establishment to the election of Labour are similarly interesting and show how scared their side is of us. Labour comes out of the book, less like the domineering and influential post-war government that we are often told about. The creation of the Welfare State brought was done with frequent pandering to the vested interests for instance. Leading politicians seem to show ignorance, naivety and indecisiveness in the face of economic crisis and social change, but nothing new there.

If you enjoyed A People's War, you'll probably enjoy this, though there is a weaker narrative - the book is more of a sequential history, rather than an attempt to come to many conclusions. That said, for those interested in social history, there is a wealth of material here of interest.