Steven Mithen - To the Islands 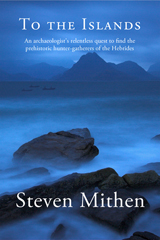 Before reviewing this book, I want to mention how I came about it. On holiday just south of Oban on the west coast of Scotland, I visited Kilmartin. This small village is the centre of an enormous concentration of neolithic sites, including several impressive cairns, a few stone circles and not a few standing stones and inscribed rocks. Kilmartin has a very impressive museum including an extraordinary bookshop specialising in particular ancient history. I encourage readers who are fascinated by the Mesolithic and neolithic periods of history to visit and support both the museum and its bookshop.

I was lucky to find Steven Mithen's book there, because holidaying on an island very near many of the places mentioned inside, helped me picture and understand his work more. Mithen is the author of After the Ice a book that I consider one of the best introduction to the lives of ancient humans living in the post ice-age world. His latest book, To the Islands is much less an academic work and more of a archaeological autobiography. Mithen describes how his career has been tied to the people of the Mesolithic era since the earliest days of his PhD studies. The Mesolithic people were the hunter-gathers who spread across the world at the end of the last ice-age. They lived, in a myriad of different ways depending on the landscape they inhabited, before with the arrival of agricultural practices, the “neolithic revolution” led to a new mode of production.

Mithen believes that to understand the people of the Mesolithic requires a detailed understanding of their lives in the context of the environment and landscape they inhabit. The fish they could catch, the deer they could hunt, the trees and plants that surrounded them, the way they would have been inspired by the land itself. His early research using computer models to predict how hunter-gatherers might exploit the natural resources, led to repeated visits to the Hebrides to try and understand the lives of these people.

Mithen is enchanted by the Hebrides, their culture, the environment and the modern people, as well as the historical inhabitants. The remoteness of many of the islands, despite the popularity of places like Jura as modern holiday destinations, has helped protect many important prehistoric sites. This remoteness leads to further problems. Mesolithic archaeology cannot rely on hunting for visible remains like stone circles. Rather, the archaeologists must look for more subtle clues. Shell middens – the piles of waste left by prehistoric peoples as they extracted food from limpets and mussels are gradually covered by grass. Rabbits can dig out the prehistoric shells, littering them outside the entrances to their warrens and provide a clue for archaeologists. Other clues can be found in subtle surface bumps, or as Mithen tries to show, simply looking at the landscape and trying to get the mindset of an ancient hunter-gatherer. What would you look for as a hunter-gatherer on a Scottish island? Easy access to fish, woodlands and shelter? Where might you sit?

In the decades of research and excavation that Mithen does, with dozens of students and helpers, he gradually comes to understand more about the prehistoric life. On several occasions, Mithen quotes an earlier archaeologist, Lewis Binford about how archaeologists must “recalibrate their perspective of hunters and gatherers from the five foot excavation unit at a single site to an area of more than 300,000 square kilometres”.

With this view, Mithen shows how hunter-gatherer life in the Hebrides was spread over island after island. One a source for flint for tools, others a good place to fish or find shellfish, another a ideal hunting ground. Life then wasn't stagnant, nor was it necessarily based in one place, instead it was spread across time and space. The landscape was a living part of human life, not a separate thing.

Mithen's book is wonderful. By choosing the autobiographical format, he has shown how archaeological understanding must develop over time, how intellectual ideas must be challenged and developed regularly to allow for new data and information.

For those amateur archaeologists, two things will be particularly pleasing about Mithen's book and his work. One is the detailed descriptions of the archaeological processes, how and where they sink trenches, why it takes so long and costs so much. The other is the importance he gives to amateurs. Countless times he visits local people and is shown their collections of Mesolithic tools. He frequently relies on local knowledge from farmers and others to find the best sites and is clearly inspired by the way that people are interested in the history of their place, even thousands of years ago.

One thought popped into my head repeatedly while reading this book. The world of academia that Mithen inhabits, a world of grant applications and quests for funding, is one that must be getting tighter and tighter. In fact his search for funding and support for his work makes up an important theme of the book. I don't doubt it is easier to get money to dig up a site of national importance or a famous image. But archaoeological work must rest on all history, even the small charcoal remains and broken tools that dominate the historical record from our hunter-gatherer past.

As funding gets further squeezed by Tory cuts and as education gets still further restricted to those who can afford it, how will academic subjects like archaeology cope? Mithen describes the passion and enthusiasm of his students and helpers. But if there is no cash to fund digs, how will the next generation of archaeologists develop and learn? Mithen is clearly someone prepared to fight for his subject in the wider world. We'll need him and others like him in the struggle to understand our past, but also to ensure that in the future we can continue to learn.

Mithen - The Singing Neanderthals
Mithen - After the Ice
Posted by Resolute Reader at 7:50 pm