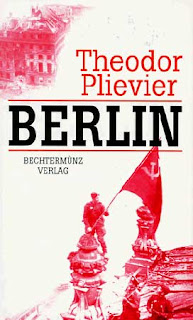 Despite the impression given by countless Saturday afternoon war films, the Second World War and Hitler's dictatorship was ended by the Russian army. The Soviet Union lost around 24 million people in the war - military and civilian. The war was brutal and the revenge upon the lands captured by the Soviet army was violent.

Theodor Plievier's book deserves a much wider reading. He himself was an interesting man - he was a leading figure in the uprising by German sailors in Kiel that sparked the German Revolution of 1918/9. This revolution toppled the Kaiser and brought World War I to an end. His politics seem to have been very left wing, and the rise of Hitler led him to flee to Russia, which he eventually became disillusioned with. He fled again to the West and lived out his days in Switzerland.

His book on Berlin captures the violence that was the end of the Third Reich. It is almost impossible to imagine the brutality that was imposed on the people of Germany. In the novel, many of them seem unable to comprehend what was happening, but most hadn't seen the slaughter at Stalingrad, the siege of Leningrad or the concentration camps. Plievier's book is clearly based on many true stories - many of the figures are historical. So the descriptions of those raped and murdered while holding out flowers for the Russian invaders read eerily true. The story certainly fits with the descriptions of other non-fiction books such as Antony Beevor's Berlin.

For many, the most fascinating parts of the book are those that deal with Hitler and the people around him. As the Germany army retreats and collapses, the debates and arguments that take place in the bunker are fascinating. The belief even as Soviet troops entered the building that there was a relief army out there, preparing to stop the Russians was a fantasy that Hitler seemed to inspire in others.

Many other figures appear - Albert Speer's character is accurately portrayed, though Plievier has an interesting style of rarely mentioning historical people by name. There are minor errors (Speer's pilot back into Berlin as he sought absolution from Hitler was a woman, not a man as Plievier tells us).

There isn't really a central character to this novel. There are men and a few women who come and go. Their rise and fall fits with the rise and fall of the city, but some linger and as we follow various characters through the last days of the war, the post war order begins to fall into place. Germany is to be picked clean, it's industry and often its man power removed back to Russia to help rebuild the economy. The new government is put in place, men are selected and though they hold dreams of rebuilding a democracy out of the ashes of the war, they rapidly find that they are pawns in a larger game. The division of Germany in the interest of the other powers has begun.

Rather startlingly, the book ends with a historic event that few may know of. The East German workers uprising in 1953 was the first time that large numbers of working people in that outpost of Russian State Capitalism rose up against a state that claimed to rule in their name. The brutal suppression is well described. Modern Berlin's long story, that begins with the events that Plievier himself took part in in 1919 still had a long way to go - and Plievier captures the tragedy at its heart.