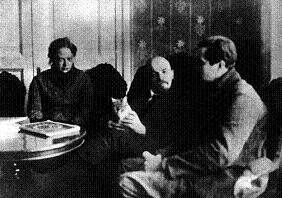 Ever since the Russian Revolution there have been attempts to discredit those who led the revolutionary movement as being monsters, only interested in power. These memories go some way to showing that the most important revolutionary socialist of the time, Lenin wasn't the power hungry, vicious revolutionary that some who would discredit the socialist movement would have us believe.

Krupskaya was Lenin's wife for almost two decades. More importantly, she was a leading Bolshevik organiser, including being secretary to the Central Committee at some of the most important points in that revolutionary organisation's history. Following the revolutionary, she played a key role in expanding and developing the educational organisation of the new, socialist society - something that had long held an interest for her.

Those who would show the "human face" of Lenin, will find here much to help their project. One biography of the revolutionary leader was called "The Man Behind the Mask", with the idea that somehow he had a different public face to his real, monstrous interior. For someone who hated the way that Tsarism and capitalism restrained and limited human behaviour, it should come as no surprise that Lenin liked walks in the country, paintings and art of all types. He liked to hunt and explore.

But it is not enough to show Lenin as an ordinary person in extraordinary times. What Krupskaya's memories show is a man absolutely dedicated to the revolutionary cause. Through years upon years of exile, the occasional imprisonment and countless difficult meetings, conferences and arguments, Lenin lost friends and made enemies. He rarely was able to see his closest families, but he was prepared to do this, because he understood that he had something to offer the revolutionary movement.

There are omissions and problems with this book - as every memoir must have. It is a product not just of the times it describes, but also of the moment when it was written. By 1930, when Krupskaya wrote this book, Lenin had been dead some 6 years. Stalin had consolidated his power over Russia and had moved far from Lenin's strident internationalism, to his doctrine of socialism in one country. The liquidation of those who had lead the revolution by Stalin was proceeding apace, the most able leaders like Trotsky had fled the country or been murdered.

This is reflected in Krupskaya's book. She cannot ignore reality completely - so Trotsky get's passing mention in the book, mostly to describe the moments when he is wrong. The book finishes however with the October revolution. Though there is no mention of the close collaboration between Lenin and Trotsky. Nor is there mention of Trotsky's central role in the civil war, even though passing reference is made to the events. It's possible that Krupskaya was fearful of confronting Stalin direct by this point. It's also possible she was writing for Stalin. There is nothing in here that can explain it either way. Those were difficult times for genuine socialists and Krupskaya may well have been hedging her bets - though she comes close to justifying Stalin's events when she singles out some quotes of Lenin's seemingly to support the idea of "Socialism in One Country".

It is of interest though, that those who would portray Stalin as a great revolutionary leader will find little mention of his role in the early Bolshevik party here either. For those who have some knowledge of Russian Revolutionary history there is a lot in here that will be of interest. Particularly for those active on the revolutionary left now, the stories of life in an underground organisation, facing constant harassment and imprisonment are fascinating. Time and again, the author describes socialists who meet some bitter end, in exile, the gallows or prison. But if there is one thing that we learn, it is that a revolutionary group, with consistent ideas and activity, can influence and make a difference when the mass of workers move into action against a system that exploits and ruins them.