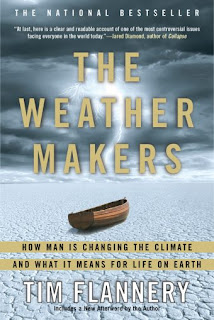 The end of 2004 saw something remarkable happen in Antarctica. For the first time, extensive meadows of grass appeared in an area of the world previously known for its snow, blizzards and ice. There probably isn’t a better example of the effects of global warming on the eco-systems of planet Earth. Tim Flannery’s new book is an explicit attempt to warn the population of the world about the future problems of climate change and what is happening now.

He paints a terrifying picture of the consequences of even subtle changes in the atmosphere. The examples he uses are very different to those often used by environmentalists. For instance, he spends a long time explaining exactly how changes to the amount of Carbon Dioxide (CO2) in the environment will change the amount of mist in certain rain-forests – and how this means the extinction of species of toad and frogs that have only been discovered recently.

Similar examples abound – from the poles to the rain-forests, Flannery paints a terrible picture, and it is indeed a call to arms against climate change and CO2 emissions. Unfortunately, this is where he comes unstuck.

Flannery argues that we need to reduce CO2 emissions by 70 percent by 2050 if we are to avoid the catastrophic changes that we face. He does point out that many changes, and many extinctions are inevitable due to historic CO2 emissions, but that we still live in a period when we can alter the outcome.

While inspiring the reader to stop climate change, he only offers solutions centred on individual life-styles. Almost absent, is the need to challenge the corporations and governments at the heart of the problem.

He is of course right to suggest that if we all had solar panels on our roofs, used bio-fuel cars or public transport and lobbied politicians to ask what they are doing to limit their own emissions, CO2 emissions would be reduced. But the biggest source of CO2 in the world is the generation of electricity, and what is urgently and drastically needed is massive reductions in energy use – mainly I would argue through more efficient localised generation and a switch to using renewable energy.

There is a surprising amount of agreement in the UK from environmentalists and government scientists that renewable energy is viable and could lead to the sort of reductions described by Flannery. What is lacking is the political will to do this.

Flannery doesn’t offer any direction as to how this can be achieved – limiting himself to personal solutions (including using hand tools instead of electric ones). Unfortunately, it is only through a mass political movement that we will ever force governments and states to challenge the fossil fuel corporations at the heart of the problem.

The fact that Flannery has written such an eloquent book is a weapon in the hands of those that want to build that movement. Sadly it doesn’t offer anyone the real solutions that will save the planet. The book that does that has yet to be published.

Flannery - The Eternal Frontier
Posted by Resolute Reader at 10:29 am

Hi. I have read a book "Heat" by George Monbiot, which does attempt to provide extremely practical solutions to how society should respond. I can't think of a more important book to read at this time.

I cannot agree more, Heat is an excellent book well worth a read. I reviewed it in October 2006 here.