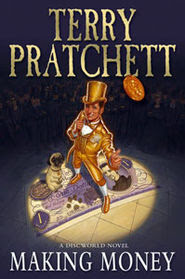 Rarely do I come away from reading a Terry Pratchett novel feeling disappointed. Sadly, this most recent Discworld story left me with the sense that the author was writting almost to a template. This is a shame, because the previous book that features the central character, Moist Von Lipwig was really rather good, full of excellent observations and amusing moments.

Of course, Pratchett at his worst is still an entertaining read and I am certainly not trying to put anyone off, but as I have argued before, I feel that Pratchett has got to the stage of the Discworld series were he is reduced to asking "What aspect of modern human society haven't I parodied yet?" and then inserting it into a book. So the previous Von Lipwig tale was the story of how the outmoded and haunted Ankh-Morpak Postal Service got a makeover, while our hero saved the city from some demonic dangers. This time the story is how the outmoded Mint gets a makeover, while Von Lipwig saves the city. In the process he invents paper money and demolishes the gold standard (though I have to say that I thought the alternate Golem Standard was a fabulous rummination on the Labour Theory of Value).

Sadly I fear that the next in the Von Lipwig tales, in which our hero takes over the Tax service for the city, will bring more of the same.

Still, it is an entertaining read, just not up in the stratospheric heights of some of the other Discworld novels. The truth is that if you liked the previous ones, you'll read this. If you've never read Pratchett, don't start here, and if you hate him, you'll never read it anyway!