Andrew Kaufman - All My Friends Are Superheroes 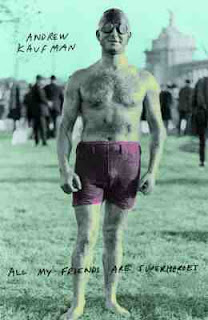 Despite the strange world that Andrew Kaufman's book is set in – one populated by a limited, but significant number of superheros (Toronto, Canada has 249 Superheroes we learn, “None of whom have secret identities.”) - the story is actually about that most important of ideas. The human condition.

In this case, Tom our hero, isn't of the super variety. He is an ordinary guy, whose friends and friends of friends all have particular special abilities. His girlfriend, The Perfectionist, can put things in order with the power of her mind. Unfortunately, on her wedding day, her jealous ex-boyfriend “Hypno” uses his own superpower to hypnotise The Perfectionist into not seeing Tom.

For reasons too complex to go into here, Tom has the length of a short flight to Vancouver to get The Perfectionist to see him, otherwise their love will be destroyed and his heart broken.

Now anyone who has suffered from unrequited love, will know Tom's predicament. To be invisible to the one you most desire is an unpleasant experience, but to be in that situation, while knowing that the other loves you intensely and can't understand your absence is pure torture.

The beauty of Andrew Kaufman's work though isn't this bizarre concoction of a world. It's the little aspects of the lives of those living in it that illuminate our own, non-super, ordinary lives. There is a beautiful moment in the book, described by Tom as he reflects on his love affair with The Perfectionist, and in particular their first night together.

The Perfectionist takes him to a hitherto unseen room in her house. Inside there are only two boxes. One labeled “Lover” one labeled “Friend”. She makes him choose which one to get in. Tom picks up the one marked “Friend” and puts it into the other.

“Then he turned around, picked up the Perfectionist, and lifted her inside the boxes. He climbed in with her. In the morning, there wasn't much left of either box.”

What starts off as a seemingly clunky metaphor, becomes a beautifully surreal examination of the complexities of relationships.

Many reviews of the book concentrate on the small little vignettes of other superheros. The Projectionist, The Battery, The Sloth, The Wild Mood Swinger. The details don't matter, but the names hint at their flaws and thus become more of a metaphor for us mere mortals than any description of human life can do.

Tom's desperate struggle to get his lover to see him is really about how we all struggle with the odds stacked against us. His solution to the problem, is of course, a triumph of logic, rather than some fantastical unknown super power that some may expect. That in itself hints at the solution to all of our problems.
Posted by Resolute Reader at 10:42 pm

Look I'll cut to the chase. Having realised what kind of a reader you are; a critical fan of Ian Banks, a love of time traqvel yarns (although ti was Bradbury not Asimov that wrote the dinosuar hunting short story) and an admirer of high concept one-offs like The Dice Man, it struck me that you might enjoy my anti organised relion novel, 'Etc Etc Amen.'

At present it's unpublished but I've been trying to gather positive feedback by sending out promotional paperbacks to folk like yourself who i think will 'get it'.

All I'd ask for in return is a few lines of blurb if you like it, and nothing if you don't.

Just so you know I'm not a complete time waster, here are a few comments I've had so far:

'A major achievement. Authoritatively convincing in each of its settings, continually intriguing and elegant in its interlocking story-lines, and peopled with appealing and distinct characters.' Charlie Gillett (author of 'The Sound of the City' and BBC broadcaster.)

'A sharp, funny, scary and incisive novel that's as readable as it is wide-ranging - which is very.' David Quantick (scriptwriter for Brass Eye and music and literary critic for The Word.)

'A highly original, artfully constructed and deliciously ironic tale. I'm sure you'll find a publisher.' Mick Brown (Author of 'The Rise and Fall of Phil Spector and writer for The Telegraph.)

'It is highly original, darkly funny, and to anyone who grew up in the 70's in England, uncomfortably familiar. The world of the KUU and the tripod remain in my mind like some strange dream. I'm sure it will continue to gather fans.' Justin Adams (musician and record producer.)

'Very rarely has a book left me questioning and pondering the very core of my being for weeks afterwards. A damn good read!' John Caldwell (picture framer.)

'I can't stop thinking about your insightful, entertaining and hideously plausible novel. The ambition is breathtaking and I found it exquisitely observed and painfully 'familiar'. The way in which you dissect the culture of cultism is both gripping and shocking. I feel exhausted and somehow richer. Thank you .' Graham Crowley (painter and lecturer.)

So there you are. The ball is your court, as they say.

My email address is:

Thank you for reading this far, and thank you for the enjoyment I've had from reading some of the reviews here. I'll definitely be ordering a copy of the Andrew Kaufma novel on the strength of your comments.