Foster, Clark & York - Critique of Intelligent Design: Materialism versus Creationism, From Antiquity to the Present 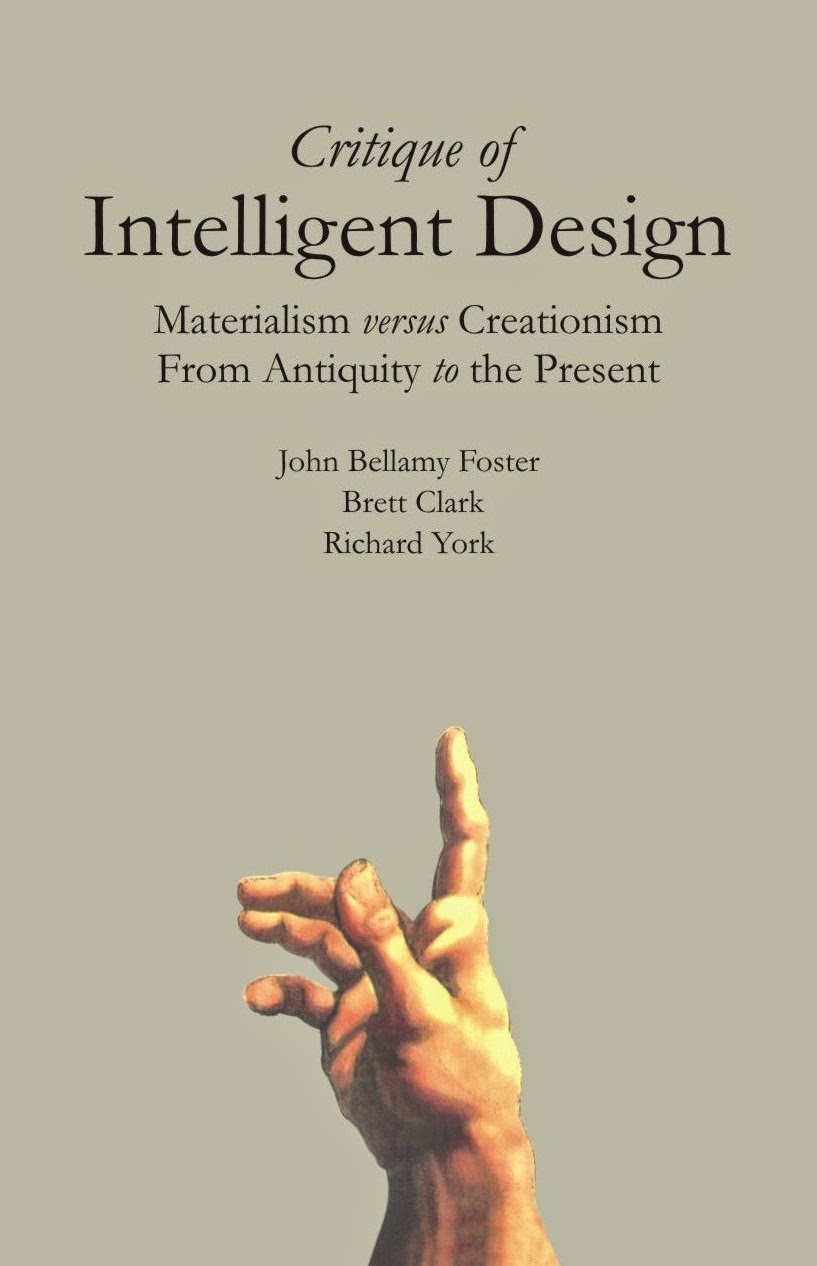 Intelligent Design has yet to make a significant impact on politics in the United Kingdom. But it has an acceptance in the United States where the authors of this book are based. The Design movement is an attempt to reassert religious dogma in the face of scientific explanations of evolution and society, and the authors have written this book to help explain and counter-act the proponents of Intelligent Design.

The battle between Creationism and Materialism has been one that has stretched back to ancient times. Indeed, the debates have shaped modern science and society. The authors point out that


Western science itself is a product of a large part of a 2,5000-year critique of intelligent design that was tied to larger social struggles occurring over the same vast period.

Intelligent Design, they write, is a "counterrevolution against science", an attempt, in the modern context to undermine and challenge materialism. Its leading proponents are well aware of this.


Intelligent design seeks not so much to triumph over materialism in public schools and other institutions as to burn iot on the cross. Intelligent design proponents see the argument from design as part of a larger crusade against materialism that traces the problem not to Darwin but to Epicurus in antiquity. Epicurus is regarded as the archetype of materialism and the greatest single enemy of creationism. Hence, the refutation of Darwin is seen as necessary but not as the final or sufficient goal in a much larger inquisition. Indeed intelligent design criticisms embrace the entire materialist tradition extending from Epicurus... to the unholy trinity of Darwin, Marc, and Freud in modern times.

Why is this so important to the reactionaries? In the words of one key figure in the Intelligent Design movement, Benjamin Wiker,


The larger materialist package supports all kinds of things which are mortally repugnant to Christians, not only... Social Darwinism and eugenics, but also sexual libertinism, abortion, infanticide, euthanasia, cloning and so on... [quoted by the authors]

Thus the Design movement wishes to challenge materialism as part of a wider reassertion of a Christian viewpoint that is inherently anti-science. The authors explain how the Design movement uses the metaphor of a "wedge", challenging at first particular aspects of science and integrating their ideas and people into wider public discourse, and ultimately "to see design theory enter into the physical sciences, but also 'psychology, ethics, politics, theology and philosophy in the humanities."

Much of this book then looks at understanding the historic development of materialist science, and the way that design was "from the beginning a response to materialist/atomistic physics". Thus the authors demolish both the failings of Design theory scientifically, but demonstrate why their approach is driven by ideology rather than a real attempt to understand the world. The authors also examine the key ideas and works of the "unholy trinity" of Darwin, Freud and Marx, who the Design movement single out as being the chief enemies. They give useful summaries of the work, particularly, at least for this reader, those of Darwin and Freud whose work is often misunderstood and caricatured by Intelligent Design proponents.

Importantly however, the authors do not simply lay out their critique of Intelligent Design and religion through simply atheism. As Marxists, they have a more nuanced critique of religion, which argues that pure-atheism isn't enough. Indeed such an approach to religion can lead to reactionary positions. For instance, when some leading atheistic thinkers label all followers of Islam as bigoted.

Marx's approach, which understood religion as offering both hope to the oppressed, as well as dulling their senses and holding back, or limiting, their movements for self emancipation, allows revolutionaries to relate to religious individuals and movements, without crudely labeling them as backward. This, as the authors point out, helped shape Marx's approach


As a materialist, Marx opted not to invest in the abstraction of God and religion. At the same time he did not attempt to disprove the supernatural existence of God, since that transcended the real, empirical world and could not be answered, or even addressed, through reason, observation, and scientific inquiry. Instead he forged a practical atheism through his scientific commitment to a historical materialist approach for understanding reality in all of its dimensions. The practical negation of God and the affirmation of humanity and science demanded an active movement for revolutionary social change, the real appropriation of the world to pursue human development - the growth and expansion of human capabilities - and freedom.

While this book is a useful critique of Intelligent Design, its real importance is in reasserting an approach to religion which is more than simply asserting that science is right. Indeed the authors conclude by pointing out that "reason, science and human freedom can only commence" when the "gods have at last been banished from the earth". That won't happen until a new world has been built, based on the interests of the majority of society and removing the real basis of religion - oppression, exploitation and inequality.

Siegel - The Meek and the Militant
Posted by Resolute Reader at 7:49 pm