Hal Draper - Karl Marx's Theory of Revolution Volume 3: The 'Dictatorship of the Proletariat' 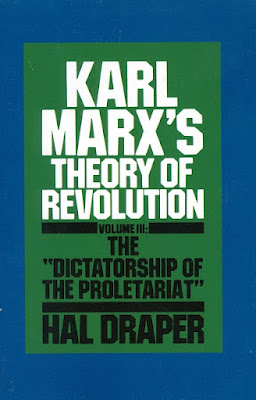 The third volume of Hal Draper's work on Karl Marx's Theory of Revolution is a different beast to the first two. Those were broad, but detailed works, taking up Marx's big themes - classes and the state - and showing how Marx's ideas developed and were applied differently at various points in his life. Book three starts from a specific, but important, concept of Marx's and explores how it was understood, how it was attacked and what it really meant. In other words this book is different because it moves from the broad picture to a zoom in on a very narrow aspect of Marx and Engels' thought.

The 'Dictatorship of the Proletariat' is a phrase that is oft repeated and usually misunderstood. Frequently in fact it is deliberately misunderstood, guided in part by some on the left who have been keen to misuse it. Draper identifies fifteen loci or occurrences of the phrase in the works of Marx and Engels. Of these, only eight were specific usages by Marx, and several of those were in works not intended for publication. Draper notes two distinct periods of the phrase's usage - the aftermath of the 1848 revolutions and during and following the Paris Commune of 1871.

The timing is important because they correspond with Marx and Engels thinking through the revolutionary process and the sort of change that could bring in a socialist society. If readers haven't read the first two volumes they will miss some key insights that underpin Draper's argument. In particular the concept of a workers' state as a transition to a stateless Communism.

in order to arrive at this [disappearance of the state - Draper] and the other, far more important ends of the social revolution of the future, the proletarian class will first have to possess itself of the organised political force of the State and with this aid stamp out the resistance of the Capitalist class and re-organise society. This is stated already in the Communist Manifesto.

The 'Dictatorship of the Proletariat' then is Marx and Engels term for this period when the newly triumphant workers' state uses its power to defend itself from attackers. Lenin famously used these concepts in State and Revolution on the eve of the workers' seizure of power in Russia in 1917 to understand the process the movement was embarking upon. Even in Marx and Engels' time the lessons of counter-revolution were obvious, hence the timing of their use of the phrase. Russia after 1917 also demonstrates to a new generation that the capitalists will waste little energy in trying to destroy any fledgling workers' power.

So why does the phrase Dictatorship of the Proletariat get such hostility? Clearly it is because of the modern meaning of dictatorship. Though it is also clear that the nature of Stalinist Russia and the Eastern bloc after 1945 have helped create the idea that socialism is synonymous with dictatorship, or single person rule. Draper begins then, with an overview of how the meaning of dictatorship has changed. He shows how, in language that would have been familiar to Marx and Engels, in ancient times dictatorship meant a brief, transitory period. He quotes R.M. MacIver (not a Marxist) who explained that:

The original Marxist doctrine of the 'dictatorship of the people' [sic] had in it something akin to the Roman idea. It was to be a temporary and exceptional form of government to prepare the way for the inauguration of a new dictatorless - in fact, stateless - order.

Draper then takes us through a detailed examination of everyone who has critiqued Marx and Engels on these points, and to emphasis his point, he critiques those that Marx opposed but was lumped together with. In particular he shows how Marx was repeatedly tarred by with the brush of the French socialist Louis Blanqui, whose revolutionary strategy emphasised action by small groups of heroic individuals substituting for the masses. Draper shows how Marx's politics were exactly the opposite of Blanqui, and indeed demonstrates conclusively that Marx had no contact with him, and could not be said to have been influenced, or worked in a secret organisation with Blanqui. Casual readers may well find themselves frustrated by these sections as Draper deploys his encyclopaedic knowledge of Marx's life and work to prove an accusation false. Indeed its a similar method to the earlier books were Draper proved some aspect of Marx's theoretical work. But here it feels abstract and over the top.

I lauded the first two volumes of Hal Draper's Marx's Theory of Revolution. I am less enthused by this volume because it focuses on an important aspect of Marx's thought, but is too focused on the minutiae. The sections, for instance, on the Paris Commune are excellent and it would have been more useful and illustrative to have expanded these. As usual though the book sparks with Draper's wit and knowledge and there is much to be had. But reader beware this is very much a book in a series, those jumping in at volume III will find themselves rudderless and unprepared.

Posted by Resolute Reader at 8:07 pm