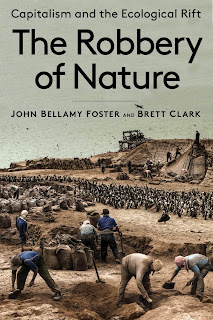 Over the last few decades John Bellamy Foster and Brett Clark have been at the forefront of showing how classical Marxism is the foremost tool in explaining capitalism's rift with the ecological systems that support our society. They have shown how Karl Marx's idea of the "metabolic rift" explains how capitalism is a break with other historical modes of production, a break that has transformed our relationship to the natural world and then broken the ongoing metabolism between humans and the planet. Reading this book while trapped at home during the Covid-19 pandemic it is very easy to see the practical application of Marx's metabolic rift theory. Other authors will no doubt build upon this, just as other scholars have followed Foster in particular and applied metabolic rift analysis to human systems like agriculture and the oceans.

This book brings together a series of essays by Clark and Foster, as well as a few other authors like Paul Burkett, that summarise this work. Many readers might have engaged with these articles in earlier forms when they have appeared in journals like Monthly Review. But to see them simply as a collection of previous articles is to miss their wider coherence.

Karl Marx developed metabolic rift theory based on his close reading of vast quantity of scientific material, in particular that of the German soil scientist Justus von Liebig. Liebig himself developed a number of ideas, in particular the idea of capitalist agriculture being a "robbery system". For Liebig, England in particular had developed a "high-input, high-output, capital-intensive form of large-scale industrial agriculture". This had yet to develop elsewhere in the world, but at the time of Marx and Liebig it had become entrenched so deeply in the English economy that it was having lasting effects upon England's soil fertility (decreasing at a rate that would today warrant the label of environmental crisis). As the English capitalists sought to solve the problem they were already spreading the problem globally as they robbed far-flung countries in search of raw materials to heal the "rift" caused by industrialised agriculture.

Marx developed this theory further into a general one of ecological degradation. More recently, John Bellamy Foster in particular has shown how it is a way of viewing capitalism's destructive action upon the world's ecology. This process is inseparable from the system itself. As the author's, quoting Marx, write:


The capitalist valorization process could thus never free itself from the conditions of "metabolic interaction between man and nature." All attempt to do so, as in industrial agriculture or the exploitation of labour power, generated a metabolic rift, a crisis of social metabolic reproduction.


At the heart of the contradiction was the reality that the social metabolism with nature under capitalism was mediated by value. Thus 'the cultivation of particular crops depends on fluctuations in market prices and the constant changes in cultivation with these price fluctuations.' This reflects the fact that 'the entire spirit of capitalist production, which is oriented towards the most immediate monetary profit - stands in contradiction to agriculture, which as to concern itself with the whole gamut of permanent conditions of life required by the chain of human generations.'

Much of the book explores different aspects of what this means for capitalism today as we face global environmental crisis. There are other important arguments though. One of which is the way that capitalist economics sees certain aspects (such as natural resources) as "free gifts" to production. In an important chapter Foster and Clark extend these discussions to the realm of social reproduction - in particular the way that the bourgeois family is used to create the next generation of labour. For instance, they write:


By the late nineteenth century... capital had at least formally created separate, alienated spheres of housewife and breadwinner... This transformed the family itself under monopoly capitalism, resulting in the relative rather than absolute expropriation of time within the household... Likewise, capital dealt with it first ecological crises (the degradation of the soil and rapacious deforestation) by means of new alienated mediations (synthetic fertilisers), which in the long run were to reappear as crucial aspects of a global metabolic rift that degrades nature even further.

While looking inward to how capitalism transformed social relations within its key economies, the authors also show how colonialism and imperialism allowed the British metabolic rift to be "transferred abroad". As Marx says, the "view of nature which has grown up under the regime of private property and of money is an actual contempt for and practical degradation of nature". A new chapter on colonial rule in Ireland demonstrates this in particular, but this is a theme that runs through the book. I also want to highlight the excellent chapter Marx as Food Theorist which defend Marx from accusations he didn't think through what capitalism did for the food systems we rely on. But the book expands that analysis to cover the contemporary agriculture/food/industry complex in ways that are particular pertinent to discussions around Covid-19 and farming today.

Two other chapters are worth highlighting for the author's defence of classical Marxism. The first is a chapter about work under capitalism and socialism. Here the authors tackle an older debate about the nature of work. Under capitalism workers are alienated from their labour. This means there is a tendency to see the future sustainable socialism as meaning that work forms a minority of peoples lives - and authors have tended to highlight the way that socialism would allow vast quantities of leisure time. This must, in part, have been a way of appealing to workers who were exhausted by their labour. But Foster and Clark highlight how this is also a misunderstanding of the nature of labour within human society. Capitalism alienates our labour, takes it from us. But it is also what makes us human. Thus


the real potential for any future sustainable society rests not so much on its expansion of lisure time, but rather on its capacity to generate a new world of creative and collective work, controlled by the associated producers.

In particular Foster and Clarke draw on the work of William Morris including his seminal novel News from Nowhere to support their arguments. I think this is an important argument, though its worth pointing out that Morris did not neglect the aforementioned leisure time either - News from Nowhere has as a subtitle "An Epoch of Rest". But this is very much in the context of his understanding that labour should not have to mean exhaustion.

The second of these key arguments is from an article that first appeared in International Socialism and is a defence of the Labour Theory of Value from critics in what might loosely be described as "left ecology". Here the authors of that article (Burkett and Foster) also tackle important debates that defend both Marx's ideas (such as metabolic rift) and his method.

These debates are important, and left ecologists and socialists must understand them. But this is not an academic argument. The importance of the politics in The Robbery of Nature lies in informing readers for the most important struggle of our times - the defeat of capitalism before it destroys the ecological basis to human life. Foster and Clarke explain that we face "ruin or revolution". Winning that revolution will require clarity of ideas and of political method. This book is part of arming us with both.

Foster - Marx's Ecology: Materialism and Nature
Foster - The Ecological Revolution: Making Peace with the Planet
Foster - The Vulnerable Planet
Foster - Ecology Against Capitalism
Foster, Clark & York - Critique of Intelligent Design: Materialism versus Creationism, From Antiquity to the Present
Foster & Burkett - Marx and the Earth: An Anti-Critique
Burkett - Marxism and Ecological Economics: Toward a Red and Green Political Economy
Burkett - Marx and Nature: A Red and Green Perspective
Posted by Resolute Reader at 6:44 pm