Ralf Hoffrogge - Working-Class Politics in the German Revolution: Richard Müller, the Revolutionary Shop Stewards and the Origins of the Council Movement 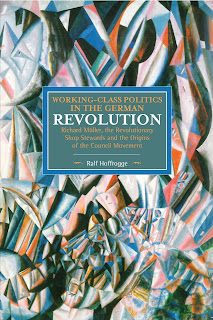 Ralf Hoffrogge's newly translated study of Richard Müller and his role in the development of the German revolutionary movement during and after the First World War is extremely important for students of this period. Hoffrogge argues that historical studies of the period have been dominated by the role of the precursors of the German Communist Party (KPD), the Spartakist League, which was led until 1919 by Karl Liebknecht and Rosa Luxemburg. The domination of the KPD on the left from the 1920s onward and then the centrality of it to the story of East Germany meant that historians had every reason to emphasis its role.

Another aspect of this, was that those revolutionaries who did not fit into the narrative, or were critical of the KPD were written out of history. Richard Müller was one of these. Müller was an able and articulate trade union militant organising within the Berlin metal workers. A lathe operator within a crucial war industry he was able, together with his comrades, to build a powerful syndicalist movement. Initially not taking a position on the war, the Revolutionary Shop Stewards rapidly became the heart of growing discontent with the progress of the First World War, leading a number of strikes and protests.

By the end of the war, with the outbreak of the Revolution in Germany, Müller was a central figure in the revolutionary movement in Berlin. So much so, that with the creation of a network of workers and soldiers councils, Müller effectively became (briefly) head of the revolutionary state. Müller was a talented individual, and Hoffrogge ably documents his central role in the heady days of revolution and the months that followed. Müller fought to strengthen the role of the workers councils in the face of domination and betrayal by the "reformist" Social Democrats.

What becomes clear while reading this excellent book, is how unprepared revolutionaries were for events. While acknowledging the very real difficulties, one of the great criticisms of Luxemburg and Liebknecht was their failure to build an independent revolutionary party in the years before the German Revolution. Hoffrogge's book makes it clear how the lack of a clear-sighted party, rooted in revolutionary politics, was lacking. The author quotes a revealing account of the Revolutionary days, when revolutionary soldiers seized a large quantity of cash:


I found Comrade Vogtherr, the secretary of our caucus in the USPD, in distress. A group of soldiers had commandeered a whole truckload of banknotes and dumped the money in the USPD caucus room. Comrade Vogtherr asked me, "What should we do with it?" We didn't know either and finally we decided to put all of the money in a safe in the central bank. My job was then to ensure that the money was transported safely. So we brought the money to the Reichsbank and I would like to say now that we were absolute idiots for giving all of that wonderful money back to the capitalists. At the time we thought that we had the power and the bank belonged to us. That was a colossal mistake. Nothing belonged to us and - as before, the capitalists had the power.

This failure of revolutionary politics was a real limit for the movement, but it was also a failing for Richard Müller. For instance, he for "fear of economic collapse, energetically opposed so-called 'wild socialisation', and not only limited the powers of workers' councils to 'audit' their employers but also failed to give them a means to actually implement even that limited power against the inevitable resistance."

In the months following the failure of the January 1919 uprising, Richard Müller spent much time detailing out how a system of workers' councils might operate. While he emphasised the role of workers, from the bottom up, he was also guilty, as the above examples show, of not really understanding the role of the capitalist state, though Muller's politics were took much from Marx and others, including Lenin.

Muller's close links to the organised working class made it hard for the Communist Party to challenge him when he was critical. Muller even went to a meeting of the Communist International were Lenin helped broker a deal to heal the growing rift between Muller and others in the leadership. Sadly the distortions on the international Communist movement caused by the victory of Stalin sealed the fate for many of the best revolutionaries of Muller's era.

In his later life, Muller drifted eventually becoming a major Berlin landlord and living until 1943. Hoffrogge shows that Muller's actions as a landlord were hardly progressive and the KPD, rather gleefully, attacked him for his behaviour. In his later life Muller appears to have abandoned his revolutionary politics, perhaps though, this reflected the defeats he had suffered as well as his occasionally limited politics.

Hoffrogge's book is a detailed examination of how individuals make a real difference. He has rescued an individual who up until now was barely a foot-note in some of the best histories of the German Revolution, and that is reason enough to read, and learn from this book.

Broue - The German Revolution 1919-1923
Fernbach - Selected Writings of Paul Levi
Reissner - Hamburg at the Barricades
Trotksy - Lessons of October
Hippe - And Red is the Colour of Our Flag
Posted by Resolute Reader at 10:51 pm