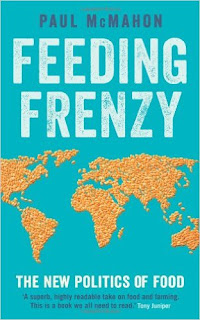 In the aftermath of the global food price crisis in the late 2000s a plethora of books were published trying to make sense of what had taken place. Food commodities were supposed to be the most stable, and with various trade protections, there should not have been massive price rises. Paul McMahon's Feeding Frenzy is one of the better books published in recent years on food politics, not least because he resolutely refuses to blame individuals as the problem. He also puts the politics of food in the context of climate change and international trade and argues that the current food system is failing hundreds of millions of people.

A key argument in this book is that population levels are not the problem when it comes to hunger. As is common in books of this ilk, McMahon gives us a whistle-stop tour of the ideas of Robert Malthus and his supporters today, who argue that "too many people" means too many mouths to feed. But even excluding land that is currently forested, or protected by national parks, McMahon tells us there are "1.3 billion hectares of grassland and open woodland suitable for agricultural expansion, a large area equivalent to 80 per cent of all crop fields today". Further, it would be entirely possible to produce even more food, if current agricultural land was used more efficiently. As McMahon points out about Africa this is isn't done because:


The unproductive state of agriculture in Africa and other poor regions is a product not of geography but of political, social and economic failures. The real reasons include poor infrastructure, dysfunctional markets, lack of knowledge and skills, limited access to finance and technology, unclear land rights, harmful regulations and tax regimes, unbalanced trade arranges, and governmental systems that do not serve the interests of the rural poor.

However McMahon understands that there is a problem here. There exists the potential to feed many more people than we currently do, and to feed everyone well who today, but that barriers are political and economic. People starve not because there isn't enough food, but because they are poor. And while we may have the potential to feed billions more, doing it in a sustainable manner is more problematic. Much of this book then is an examination of the nature of modern agriculture and his conclusions are bleak:


the modern agricultural revolution has come at a price. It has been built on cheap and abundant energy, mostly in the form of fossil fuel. Hydrocarbons mot only power the tractors on the farm, and the ships and trucks that carry food around the world, but they are a major input for the production of fertilisers and agro-chemicals.... modern farming can destroy the natural resources on which it depends. Aquifiers are pumped dry; land is poisoned by chemicals; over-ploughed soil washes away; the inappropriate use of pesticides and antibiotics breeds resistance pests and diseases. Farming.... is a major source of greenhouse gas emissions...

So what is McMahon's solution? At one point in the book I almost cheered when he wrote that he was going to defy convention and not tell the reader what their diet should be. Instead, McMahon is highly critical of the economic system that shapes modern agriculture. He argues that "free trade" is not the answer, and even quotes former US President Clinton bizarrely arguing that "food is not a commodity like others". Whether or Clinton has suddenly become a major critique of capitalist food system, I doubt, but McMahon's point remains solid. It is neo-liberal policies in agriculture, dominated by the most powerful nations and enormous corporations that are distorting the world's food system, and turning it into a highly inefficient way of feeding people. Industrial farming is not designed to feed people, but to maximise profits:


Profitability in farming is driven not by high yields but by good margins - the difference between the price a farmer gets and the costs of production. High-input, mechanised farming systems emerged during a time of cheap energy, which kept costs down.

McMahon argues that there are signs that investors are moving towards better economic systems, but frankly I think this is pie in the sky. What investors want is a return, and while it might be profitable to change things while oil prices are high, that may not be a long term strategy for them. I do agree with him when he says that "if we are going to make the transition to a sustainable and just food system this means altering the political and economic framework in which we all operate". And I certainly do agree that the start is to insist, as he does through the book, that governments must take a leading role.

But we have to go one step further. Unless we challenge the powers of the massive agricultural corporations, and unless we stop neo-liberal capital itself, we will see the profit motive destroying land and food. Reforms can limit this, but we have to put the food system and farming back into the hands of those who work the land, produce the food and distribute it. That requires a revolutionary change and while Paul McMahon's book provides much powerful fuel for this argument he pulls up short of a more radical conclusion.

Nevertheless, this is a powerful and useful book for activists and people concerned about climate change and the food they eat. It deserves a read.

Oh this sounds really good! Will definitely look for it at my library.