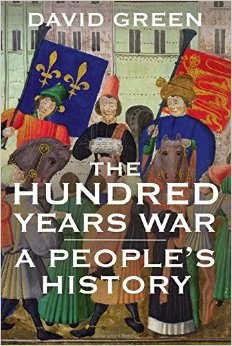 If one theme dominates David Green's history of the Hundred Years War above all others, it is change. Changes to the lives of those who fought the battles, or ploughed their fields; changes to religious institutions and battlefield tactics, changes to the perception of women in society, or concepts of chivalry. This isn't surprising, after all this was a conflict that lasted generations and involved a succession of monarchs on both sides of the Channel. It was also an enormously brutal war, marked by massacre on both sides and savage tactics.

Today we mostly remember the battles of Agincourt or Crechy. But the war began with a series of raids by English armies, designed to deprive the enemy of resources, human and material, and demoralise the population. In these chevauchée


the chivalry of England... attacked those least able to defend themselves in order to undermine the legitimacy of the French monarchy economically and symbolically. And yet this was considered chivalrous behaviour. At its heart chivalry was a military code concerned with war... So, in 1346, in a display of often pitiless chivalry, the English laid waste to Cherbourg, Harfleur and much of the Normandy coast. Caen fell, and there, in proper chivalric fashion, a number of eminent (and valuable) French noblemen were taken captive and held for ransom...

David Green reminds us of the human factor.


The Black Prince, therefore, built himself a chivalric reputation on the ashes of peasant houses; he gained renown by burning the property of those least able to defend themselves and by taking valuable prisoners.

But as the war progressed, the very basis of this chivalry was undermined. The longbow put the masses in a position of domination on the battle field, and the introduction of artillery eventually meant that the lucrative trade in prisoner's ransoms became less worthwhile. Anonymous death from the skies had arrived, much to the disgust of those who saw the role of the knight as matching some near religious ideal. By the time the war ended, Green notes, that "chivalric individuality had been transformed... into an ideal of collective service in defence of the nation".

Indeed the war did a great deal to stimulate the rise of national identify in France. By its end, "Frenchmen and Englishmen, collectively, thought of themselves differently, and as very different from each other". Part of the reason for this was that the ruling classes on both sides had to develop justifications for the ongoing conflict. For instance, the English had to demonstrate that they had a right to rule France. This in turn meant they had to shed some of their historic identification with France - English became the language of court, rather than French.

More importantly, at the bottom of society there was an identification with the aims of the conflict and the military investment in it. The 1450 rebellion of Jack Cade had many of its roots in the unwillingness and inability of Henry VI to defend his territory in Normandy. That a major rebellion could take place, in part, over the failure of a government to prosecute a war successfully seems a shock to us today, especially when contrasted to the events in 1381 when revolt was about the very nature of medieval society. But Green argues that this contradiction has its roots, not in the domination of reactionary ideas among the masses, but in a growing identification of ordinary people with the national interest.

That is not to say that the peasantry enjoyed the war. The people of Kent were constantly struggling as a result of the armies that marched through their lands or were quartered in their villages. The "dreadful time" for the peasantry was particularly true for those in France who suffered battle, famine and the horrors of becoming a refugee as various armies ravaged their lands.


no one could get any ploughing or sowing done anywhere... Then most of the labourers stopped working in despair, abandoned their wives and children, and said to each other: What shall we do? Let it all go to the devil, what do we care what becomes of us? We may as well do the worst we can instead of the best. We'd be better off working for Saracens than for Christians, so let's do all the damage we can... It's our rulers who are the traitors, it's because of them we must ... escape to the woods like strayed animals.

Green also notes that the war also saw a positive change in the fortunes for some of those at the bottom of society. Alongside the war, famine, plague and agricultural crisis had thinned the population and the peasantry's "scarcity in a new world made them valuable." While such changes might have been hard to see from the position of the peasant, the world historic impact was enormous as wage labour came to dominate over feudal obligations.

But a great strength of David Green's book is that while he highlights the importance of these outward changes, he doesn't ignore the more subtle, and often more fundamental, changes taking place within the fabric of society. One aspect of this is the way that recruitment for armies became more professional. The old feudal role of the lord bringing his armed retinue with him to war, was diminishing to be replaced by a system of indenture - "soldiering had become a job of work for the common man, not simply a feudal obligation". 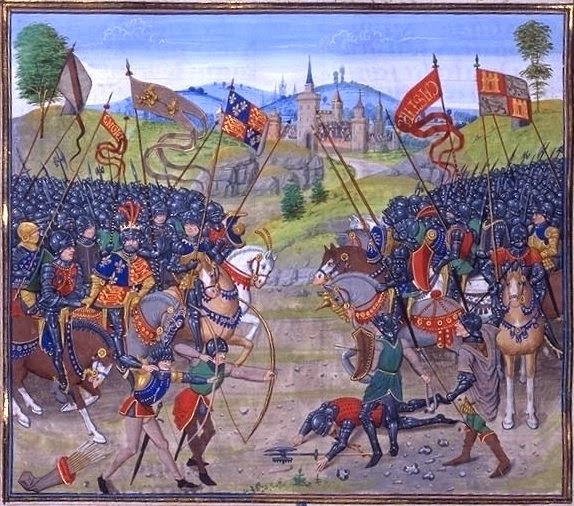 The role of women during the Hundred Years War challenged perceptions of the times. The most obvious of these is the way that Joan of Arc took on a leading military role. But Green documents the less well know women who took leading roles, such as the mistresses of kings who played the game of politics and often paid with their lives, or reputation. Alice Perrers, the mistress of Edward III, being described by Thomas Walsingham as a "shameless, impudent harlot, and of low birth".

Other women were encouraged to play their part in the war effort. Edward III wrote to three aristocratic women in 1335, urging them to "gather trusted advisers together in London to 'treat and ordain on the safe custody and secure defence of our realm and people, and on resisting and driving out the [French] foreigners' who Edward believed were massing troops and ships for an invasion."

More actively, Jeanne, wife of Jean, future duke of Brittany led the defense of her town,


riding through the streets urging the townsfolk to take up arms, encouraging women to 'cut short their kirtles [gowns]' and carry 'stones and pots full of chalk to the walls', so that they might be thrown down on their enemies. The countess then rode out armed at the head of 300 horsemen to charge the French camp before setting it on fire and returning to Hennebont to defend it from another assault.

But there were other, less positive aspectr, reflecting the violence at the heart of the conflict. Rape was a weapon of the Hundred Years War and "assaults on the body politic of ones enemy might easily become equated with an assault on their physical bodies." An English Statute of 1275 even "downgraded" rape from a felony to a trespass.


no longer to be punished with loss of life or limb but by a fine or imprisonment. The crime also became closely associated with abduction, and in legal terms the concern shifted away from the women affected directly and focused on the implications of rape for families - chiefly aristocratic families.... Consequently in England in the later Middle Ages rape became a crime as much against a a man (husband, father, and so on) as it was against a woman. Within the context of the Hundred Years War English authorities might, tacitly, have viewed rape as an attack on property".

David Green's book is a comprehensive study of the impacts of the Hundred Years War. It is, however, not an introduction, despite the populist title. Those looking for a narrative history of the conflict will be disappointed by the summary of the war which is inadequate for a thorough appreciation of the remainder of this excellent book. Nonetheless this is an excellent read which will interest and stimulate readers who want to learn more about this important period.